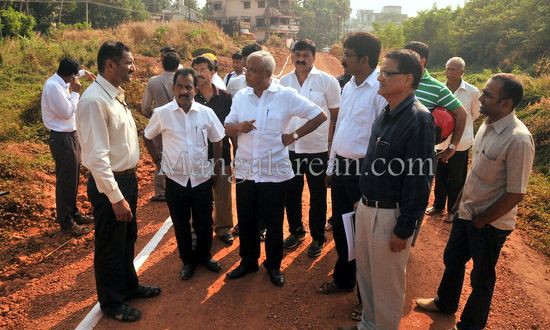 Mangaluru: MLA J R Lobo along with the Commissioner of City Corporation and Mayor Mahabala Marla visited the land, where the New Central bus stand will be built at Pumpwell here on January 6. It is a long pending project. Speaking to the mediapersons Lobo said that for many years, the project of building a new central bus stand has been pending. “Long back, we had acquired 7.5 acres of land at Pumpwell and we have the necessary documents to start the work now.”

“The present land is not sufficient and our plan was to buy more land but at present we have dropped the idea of acquiring more land. In the land available now, we will utilize 5.5 acres to build a 4-storey building for buses to halt. Three floors will be used for the buses to halt. How to bring the vehicles inside, and how many buses can be accommodated at one time and how to accommodate cars and other vehicles will be planned.”

“In the first floor, buses travelling from Udupi will be provided parking space, in the second floor buses from Moodbidri and other places will be accommodated and in the third floor buses from Kerala and Puttur routes will be provided space. We can accommodate cars and other vehicles on the fourth floor. 5.5 acres of land will be available for the bus stand, the rest of the land being used for other purposes.”

“At present, 525 buses completing 2500 trips come to the city bus stand everyday. Out of the 525 buses, 400 are private and 125 KSRTC. During peak hours, at a time 150 buses halt in the bus stand. For that we need to add 10% per year because of the growth of the city. In two years time, the new bus stand project at Pumpwell should be completed. We will continue to operate the present bus stand at Statebank until we complete the new bus stand.”

“We are planning to have a world class railway station as a part of greater Mangaluru. We are planning to have an integrated bus stop. At present, we do not have any plans to start KSRTC depot here in Mangaluru. If the world class railway station will come to Mangaluru, we will proceed with the plan to have a transport hub. We will provide facilities to the autos and taxis, a commercial complex will also be built. We need to get grants and loan from the government without which we cannot complete the project.” He further said that the government has already assured to grant funds to build the new bus stand at Pumpwell. “We are planning to start the work as soon as the funds are granted.”