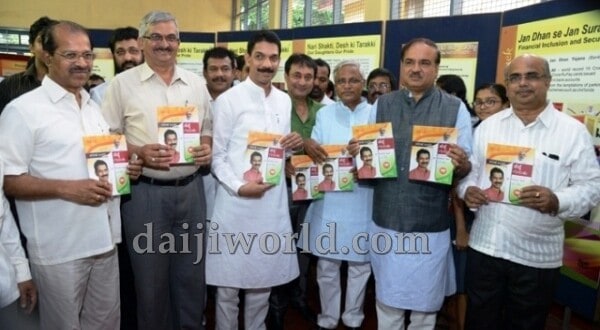 Mangaluru, Jun 19: The participants at a programme organized at Hindi Prachar Samiti hall in the city on Thursday June 18 witnessed a rare event – release of book on the achievements of MP, Nalin Kumar Kateel, and union government led by BJP, in the hands of Congress MLA, J R Lobo.
At the venue of this programme, where a photo exhibition titled ‘Saal Ek Shuruaat Anek’ was also held, prominent BJP leaders were present. MLA, J R Lobo, released a book on the achievements of the central government and the MP, during the last one year, after he was handed this book and requested to release it.

The programme of photo exhibition had been organized by union ministry of information and broadcasting. Union minister for chemicals and fertilizers, Anant Kumar, MP, Nalin Kumar Kateel, BJP district president, Pratap Simha Nayak, former MLA, Yogish Bhat, and BJP leader, Rukmaya Poojary, were present. During the programme, a book on BJP government’s and MP, Nalin Kumar Kateel’s achievements was given to Lobo among others, with a request to release it. Lobo obliged along with other dignitaries.

Lobo gave ample evidence of his rich political acumen, pro-development approach and maturity, when he commented later that he had taken part in the programme of the central government, being the local MLA.

“I was not aware in advance about the release of this work. I released it along with others, as I was under the impression that it was brought out by information and broadcasting department of the central government. I do not believe in making a big issue out of such things. When releasing works of writers, we do not look into how the individuals are politically aligned. I have no regret about this incident. Anyway, he is our member of parliament and I do not mix party politics in the matters of development. It would have been a mistake if the release was done at his party office,” he clarified.

With his generous approach and honest feelings, Lobo has proved that he is a mature politician who does not believe in harping on petty politics and making mountain out of a molehill. The political scenario in the state and country can vastly improve if everyone takes cue from this incident and vow to stay non-aligned where the issue of development is concerned.