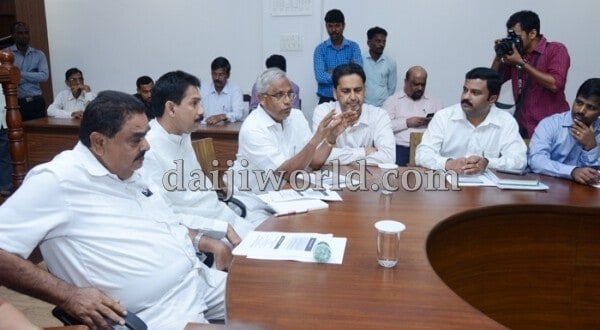 Mangaluru, Sep 18: The district administration on Friday September 18 convened a meeting to discuss plans and strategies in order to ensure Mangaluru makes it to the first list of 20 Smart Cities.

Mangaluru is among the six places from Karnataka chosen for union government’s ambitious Smart City Mission, in which 100 cities/towns from across the country will be upgraded over a period of five years. Among the 100, twenty cities will be chosen by the end of this year in the first lot to receive central funding of Rs 500 crore spread over the next five years. In the next two years, 40 cities each will be selected for the funding.

The meeting, held at DC’s office here, was presided over by district incharge minister Ramanath Rai.

The meeting discussed preparatory actions to be taken in order to get Mangaluru in the first list of the Smart City project. Member of parliament Nalin Kumar Kateel, MLA J R Lobo, MLC Ivan D’Souza, deputy commissioner A B Ibrahim, mayor Jacintha Alfred, consultancy team appointed by the union government and officials of MCC were present.

During the meeting, discussion was held regarding submission of proposal to include Mangaluru in the first list of 20 cities, which has to be sent to the central government before December. City corporation consultant Dharmaraj explained the technical details. District incharge minister suggested the officials to form a task force to oversee the proposal.

Consultants representing the union government said the proposals submitted by the 98 cities chosen so far for the Smart City Mission will be sent to Bloomberg Philanthropies, which is providing technical and strategic support to the project. Among the proposals, Bloomberg will choose the best 20, and these cities will be developed in the first phase. The consultants further said that apart from the proposal, other factors like political environment and elections will also play a role.

J R Lobo said the Smart City project should bring more investment into the city, so that more capital flows in and there is economic growth.