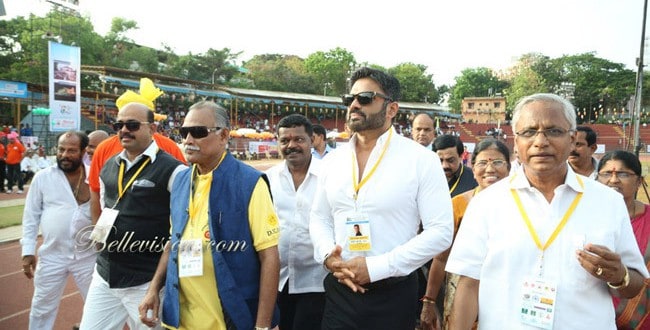 The event was inaugurated by Higher Education Minister R V Deshpande who was also the chief guest on the occasion. Bollywood star Sunil Shetty, who hails from Mangaluru was also part of the inaugural ceremony.

“It gives me great pleasure to be part of this inaugural ceremony where the winning athletes will be selected for the Asian Athletics Championship and World Athletics meet in China and Rio Olympics. The coastal district which has already carved a name for itself in the field of education today added another feather on its cap of success by organising the national level event,” he added.

He further said that the state government is ready to contribute and help the region in organising such events which provides a platform for budding athletes.

Bollywood star Sunil Shetty who spoke on the occasion expressed that he is proud to be part of Mangaluru which in years has gained name for providing platforms and exposure to different talents.

Minister for Sports and Youth Affairs Abhaychandra Jain thanked Athletics Federation of India for giving an opportunity to organise the event which would elevate the name of coastal district to the national level.

He also advised the athletes not to indulge in doping owing to any pressure instead to participate in sportive manner.

Prior to the inaugural ceremony a grand parade by various athletes of different states, cultural extravaganza by students of Alvas College, Moodbidri and hoisting of flag was also held.

Athlete Sahana Kumari, who holds the national record in high jump, was the flag-bearer of the Karnataka team during the parade and took oath on behalf of all the participants.

Nearly 1000 athletes from different parts of the country will be taking part in 24 events for men and 23 for women in the athletics championship for four days which will conclude on May 4.