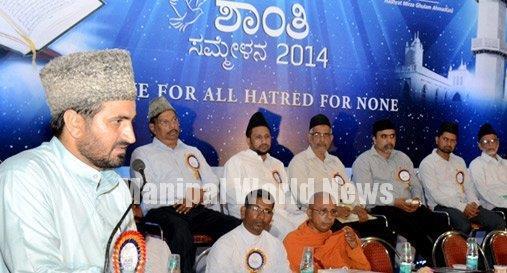 Image from Post Regarding Time for Islam to spread message of peace;MKAN President Rafeeque Sahib

Mangalore, May 4, 2014 : Majlis Khuddamul Ahmadiyya National President Rafeeque Beig Sahib said it was the time for Islam to spread the message of peace, thus shedding the fear that many countries have towards Islam due to actions of certain Muslim groups.

He was delivering the presidential address at the Peace Symposium-2014 organized by Ahmadiyya Muslim Jama’at to spread the message of peace at Town Hall here on May 3,2014. At the time when peace is fast disappearing from the world, it is of importance to nurture peace at home, which will then spread to the street, town and the nation.The core essence of Islam is peace. There is no religion greater than peace. However, Islam has been looked upon from a ‘terrorist’ perspective, which is unfortunate. No religion encourages disharmony,” he said
Swami Jitakamananda, Reshma Ullal, Mayor Mahabala Marla, J R Lobo, and Manohar Prasad and others were present.