Home » Manglorean » Mangalore:Private Participation is Must for Development of Beach Tourism – Minister Deshpande 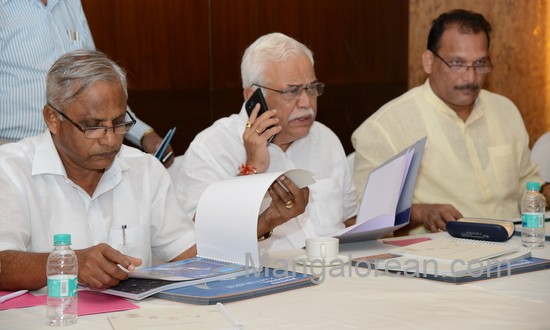 Mangalore:Private Participation is Must for Development of Beach Tourism – Minister Deshpande

Infoysis Vice President Ramdas Kamath presenting demands to develop tourism in the Coastal district said that, there are 46 beaches in the state with ample opportunities to develop beach tourism. Most of the people from the state go to Kerala and Goa state where the beaches are well developed. We have submitted a report after the survey about how to develop the beaches, how to attract tourists to the coastal beaches and how to generate income from beach tourism. If we think about developing beach tourism, we can generate revenue as well as we can create job opportunities. 46 beaches have been identified throughout Karnataka coast, that could be developed as world-class destinations with proper involvement of private, local and Government.

He further said that Changes should be made in CRZ Notification to suit the Tourism requirements, Shifting of CRZ office to Mangalore, Formation of National Maritime Board Exemption of Customs Duty for Beach Tourism Materials and equipment’s. The facilities to the Home stay owners such as Financial assistance by way of Subsidy and interest free Loans, Creation of separate brand for the beach home stays, Marketing by way of promotions by the State in all their publicity materials and Training the home stay owners and home makers in Hospitality and hygiene.

Beaches that need to be developed with basic infrastructure as the next generation of Smart Beaches, Infrastructure, Wide connecting Roads, Welcome Arch signage at the NH, Proper floodlights, Jet ski for the Rescue Team(Lifeguards), Restrooms, Parking space.

District Minister In-charge Ramanath Rai said that to develop beach tourism we need to create such an environment, so that the people are attracted towards the coastal beaches. He assured to shift the CRZ office from Bangalore to Mangalore.

Chowta suggested that many new buildings in the district have helipad which in case of any emergency can be used. People are also interested to fly by helicopter to see of the district. If the government will permit to have a helicopter in the beaches, it will generate wealth. He also requested the minister to give approval for the same.

Minister R V Deshpande said that the State government has taken all the measures to promote beach tourism. He said that the State government has appointed consultants and experts to study the tourism potential in each district and submit a report. The government plans to speed up beach tourism in the coastal region. Forty-four beaches and some islands along the 320-km coastal line of Karnataka, from Mangalore to Karwar have been identified. The development work of the beaches will be carried out soon.

While concluding Deshpande said that the government will improve the infrastructure in 23 beaches with rescue boats, toilet facilities, Infrastructure, Wide connecting Road, Welcome Arch signage at the NH, Proper floodlights, Jet ski for the Rescue Team(Lifeguards), Restrooms and Parking space. The Infrastructure development in these beach areas will be given priority. Due to high tide we have limitations to undertake construction work in the coastal area.