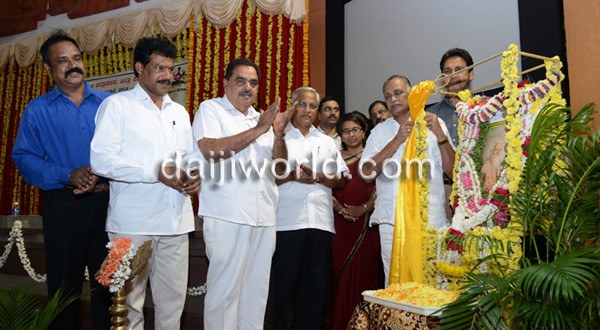 Mangalore, Oct 8: “The Valmiki community is becoming socially and economically stable in the society. If you want a sustainable society then you must strive for its development. If a person is weak or he is not able to move forward in his life, others should encourage him to not to give up and should show him the way to success.” said minister for forests, ecology and environment, B Ramanath Rai during the celebration of Valmiki Jayanthi.

After inaugurating the ceremony, Ramanath Rai said that people should help others and in return something better will come. “There are people who are deprived of basic material and cultural benefits in the society. Everyone should get the basic benefits and not only Government, the society also should look after it.”

Speaking about the ‘Ramayana’, Rai said, “We talk lot about Ramayana but we never say anything about the writer Valmiki. No one should recognise any person by his caste or relegion, all are equal in the society.”

Unveiling of the portrait of Valmiki was done by minister for Youth Services and Fisheries Abhaychandra Jain along with other dignitaries. He also paid tribute to Valmiki on the occasion.

Addressing the gathering, the main speaker of the ceremony Dr Nagappa Gowda, Mangalore University college assistant professor said that the October 7 is a very meaningful day as Government itself has come forward to celebrate Valmiki Jayanthi.

“Valmiki and Ramayana are both one and the same as Ram and Sita both lived in front of the eyes of Valmiki. Ramayana should not be considered or pointed out as a single relegious story. Ramayana gives lesson on values like sacrifice, compassion and humanism to the society which inspire everyone to render service to the deprived sections. As a person, ‘Ram’ personifies the characteristics of an ideal person (purushottama). He is a role model to everyone.” he added

Dr Nagappa also briefed about the epic Ramayana during his speech.

Deputy Commissioner A B Ibrahim said, “People who are involved in committing crime or having bad habits should stop oit and have to become a good person and should guide others also. There should be refinement in our lives so that impurities or unwanted elements be washed away.”

In his presidential address, Mangalore South MLA J R Lobo said that the India is the only country which has lot of culture and history. Speaking about the Valmiki’s early life as ‘highway robber named Ratnakar’, Lobo said, “Valmiki’s previous name was Rathnakar and was a robber but he got transformed later and he became Valmiki and wrote Ramayana. Valmiki worked towards the transformation of people.”

“In society some people knowingly or unknowingly put their hands into bad work. We have to think before we do something. If every community gets developed, then the whole nation will be developed. Even we have to become like Valmiki. We should not consider anyone as a lower level person. All are equal. When there is a chance for you to shine, you should never let go off that chance.” he added.