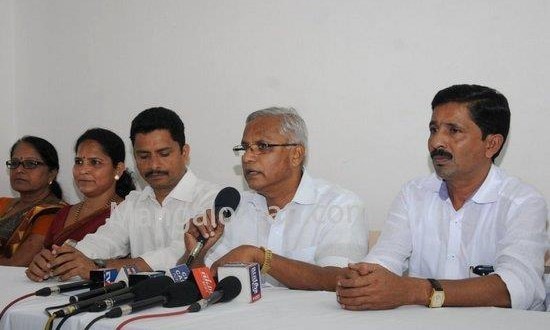 Mangalore : MLA J R Lobo held a press meet to reveal future plans for the city, at the Eden Club here on July 12.

Addressing the mediapersons, Lobo said that according to the election manifesto, which was released before the Assembly elections, to make Mangalore a port city, the state government has assured to make it a reality.

From the past one year we are concentrating on the total development of the city. We have discussed in a meeting in Bangalore the issue of making Mangalore city into a port city with the presence of the Urban development minister Vinay Kumar Sorake and have decided to take the opinion of the experts in the development work.

Last week a meeting was called to discuss the issues related to fishing which was presided by the chief minister.

He further said that the old port will be renovated, the dry fish market will be extended and the open fish auction area will be covered. The project reports to build modern fish Markets in Urva Stores, Kankanady and Kadri are ready. Urva Stores and Urva Market plans have been sent for approval and the Kadri and Kankanady markets plans will be sent for approval soon. The smaller markets will be upgraded, he said.

By developing the fish auction area, we can promote tourism, many people are interested to see the auction area and the entire process of the fishing activities.

To make Mangalore into a port city we need to work for the all round development of the city and give special attention to improve basic facilities.

Lobo said that in the second phase, the government has already sanctioned Rs 350 crores for drinking water, drainage, rain water drainage, waste management and for the development of the roads. These are some of the steps taken to improve basic facilities and solve the problems.

To rebuild the main markets in the city, such as Urva market, Urva Stores, Kankanday, Kadri and Central Market project is getting ready and discussions are being held to take up these projects. It is a huge project and we need to follow the procedures properly.

For the Mangalore Corniche road, from Jappinamogeru – Kuloor – Gurupur bridges, roads will be developed in three phases. We have prepared the town planning and are waiting for the approval from the government. Rs 4 crores will be spent to built a international level swimming pool in Mangalore. Tourism will be given priority, and a Coastal circuit has been sanctioned. There are plans to build a hanging bridge in Sultan Battery and discussions are being held in this regard.

Pilikula Nisargadama will be upgraded to international level. 3D Planetarium will be opened by March 2015, it will be the first of its kind in India. District Minister In-charge Ramanath Rai has sanctioned Rs 5 lakhs for the development of the Eco Park.

IT industry will be upgraded because DK is in third place in the IT industry whereas Bangalore and Mysore are in first and second places respectively.