Home » Website » Manglorean » Mangalore: Whatever good you do on earth is heaven – CM Siddaramaiah During PRSC Inauguration 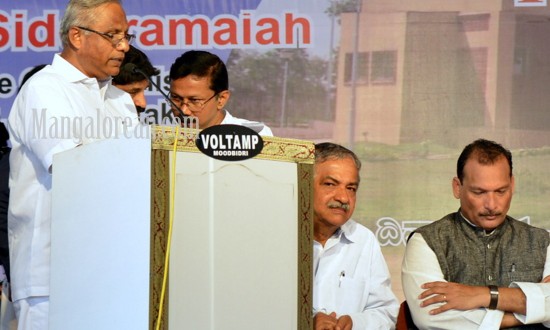 Mangalore: Whatever good you do on earth is heaven – CM Siddaramaiah During PRSC Inauguration

The Chief minister of Karnataka Siddaramaiah and the Central Minister of State Culture and Tourism, government of India Sripad Naik inaugurated the Pilikula Regional Science Centre by unveiling the plaque of the centre.

The stage programme began with an invocation. Deputy commissioner A B Ibrahim welcomed the gathering. The programme was inaugurated by CM Siddaramaiah and Central Minister of State Culture and Tourism, government of India Sripad Naik by lighting the traditional lamp along with other dignitaries on the dais.

Addressing the gathering CM Siddaramaiah said that in collaboration of Central and state government we have been able to inaugurate the Pilikula Regional Science Centre, in DK region. CM thanked the central government for the contribution in building the science centre in this region.

CM further said that science and technology is very much important for the development of the society. 21st century is the era of science. Every human being needs to develop scientific thoughts. If everyone will get the knowledge of science and technology, there will be development in the society as well as in the country. Recalling a quote from Jawaharlal Nehru, Siddaramaiah said, “It is science alone that can solve the problems of hunger and poverty, of in-sanitation and illiteracy, of superstition and deadening of custom and tradition, of vast resources running to waste, or a rich country inhabited by starving poor… Who indeed could afford to ignore science today? At every turn we have to seek its aid… The future belongs to science and those who make friends with science”.

In India there is poverty, lack of employment and economy but we are in the fourth place in science and technology by reaching the Red Planet, after the Soviet Union, United States and Europe. He congratulated the scientists of the Indian Space Research Organisation for the success of the Mars Orbiter Mission. He also urged the educational institutions to teach basic science so that they can show interest in science. We need more scientists in our country. DK is a highly literate district and we want more scientists from DK.

Sripad Naik speaking on the occasion, said that the Regional Science centre is inaugurated under the scheme of government of India and already we have setup 48 centers in different part of the country. In Karnataka this is the first center and we are planning to set up another one in Mysore. Sripad assured to set up science centers in every district.

Science is the concerted human effort to understand, or to understand better, the history of the natural world and how the natural world works, with observable physical evidence as the basis of that understanding. It is done through observation of natural phenomena and experimentation that tries to simulate natural processes under controlled conditions. Science is fun to learn and the Pilikula Science center will help the students to learn more about science and technology.

A booklet was released by Minister Sripad Naik on the occasion.