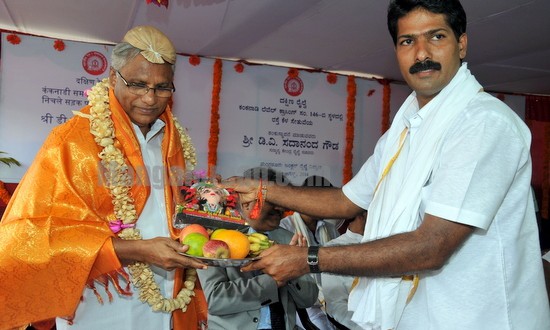 Mangalore: The foundation stone laying ceremony for the Road under Bridge in Lieu of Level Crossing was held on Padil – Bajal Road at Kankanady Railway station here on August 16, and the Union Minister for Railways  D V Sadananda Gowda laid the foundation for the same along with other ministers.

The stage programme began with an invocation. General Manager of Southern Railway Rakesh Mishra welcomed the gathering. MLC Ivan D’Souza speaking on the occasion said, “For the development of the district we need to work hand in hand forgetting the party differences. Union minister for Railways D V Sadananda Gowda will fulfil all our demands connected the Railways. A long pending dream of getting a Road under bridge to avoid level crossing on the Padil – Bajal is going to be a reality. We have other demands of getting under and over bridge at Mahakali padpu, to make a separate Mangalore Railway division, to train and see that all the railway officers be able to communicate in Kannada and to start fast trains to Bangalore – Mangalore”. He also urged the minister to do all the railway development work under the Central government funds.

Speaking on the occasion MLA J R Lobo said that from the past 30 years there was a demand to construct a Under Bridge in lieu of level crossing no.146-B on Padil – Bajal road at Kankanady, but today the dream has come in reality. He congratulated D V Sadananda Gowda for laying the foundation stone for the same. Further keeping some more demands in front of the minister Lobo said , “For the development of the Railways in the state, the central government, state government and the Mangalore city corporation should join hands forgetting the party differences. When TMA Pai was the railway minister he contributed a lot for the district later George Fernandes and Oscar Fernandes also strived hard for the development of the district”.

Lobo urged the minister to grant permission to widen the road at Kulshekar Kannagudda for the smooth flow of the traffic. At present the railway department is very reluctant to issue permission to broaden the road because of which the people of that locality are facing a lot of problems. Kulshekar – Kongur road should be widened and speed up the Mahakali Padpu under pass work.

Nalin Kumar Kateel speaking on the occasion said that there were lot of demands to construct the Road Under Bridge in lieu of level crossing no.146-B on Padil – Bajal road at Kankanady which has been fulfilled by the Railway minister. He further said, “It was not possible for me to fulfil the promises made in my last tenure 5 years ago, but when Modi became the prime minister within 2 months of time I have been able to keep my promise and the foundation stone has been laid for the said project. As soon as DVS became the railway minister the demand to have a train stop at Nerlakatte and Yedamangala was done within 2 days of his oath “.

Mayor Mahabala Marla speaking on the occasion said that the Railway officers demand funds every three months by adding additional cost which is delaying the work. There is a delay by the railway department in responding to our queries which should be taken care. He assured that MCC is ready for allocating funds for the railway work if the railway officers respond in time.

Ramanath Rai speaking on the occasion said, ” Sadananda Gowda is from our own district and he is the Union Railway minister and he is capable of solving all the problems of the DK people. Seems like are no good days ahead, but being a Central minister, it is the duty of D V Sadananda Gowda to solve the problems related to Railways of his district. From U P Mallya toJanardhan Poojary ,all the ministers have contributed tremendously to the district. Hope Sadananda Gowda will also contribute to the district through the Railway department.The state government is ready to contribute 50% of the funds for the development of the Railways”. Rai extended his whole hearted support for the development work of the Railways.

Speaking on the occasion Sadananda Gowda said, “The railway department should be the asset of the people and not the asset of the railway department. Each DRM should visit the station every day to inspect the cleanliness and other operations”. He also urged the people to maintain cleanliness inside the train, sometimes people spit inside the train, do we spit inside our house? he questioned. He said that the people who are using trains should treat the railway station as their own and keep it clean. 2 crore 25 lakh people are travelling everyday by train. Safety, comfort and security will be maintained in every station.

“I have a goal to bring changes in the Railway department. Safety, security and service should be given importance. We have started Railway tracking facilities, people can track the location of the train. We are issuing 7200 tickets per minute. To provide quality food for the travellers, we have raided the food canteens and penalized 11 canteen owners up to Rs 1 lakh. If they don’t improve and are fined three times their license will be cancelled. This time according to the budget, whatever the government has announced will be fulfilled. Development is a continuous process, there should not be any politics in the development work. Modi has assured to take all the people of the country in confidence and rule the country” added DVS..

He further said, “Politicians should work with sincerity and honesty, ability and capacity automatically follows. My smile is a blessing from God and it should be peoples smile. Mangalore Jokatte and Panambur junction road work, Rs 230 crores budget has been reserved and approval has been given for the work, the work will start soon. New train to Bangalore -Mangalore will be started soon and it will be named as “Kudla Express”.

In 6 states there is no connectivity by rail, within three years of time all the 6 states will get connectivity. Within 5 years of time we need to solve all the problems related to the railways and within 6 months, new Mangalore Railway division will be started, DVS assured.