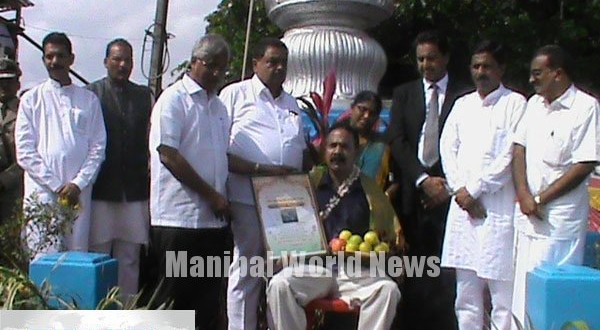 Mangalore Aug 16:  The  68th Independence Day  was celebrated at Nehru Maidan in Mangalore on August 15, Thursday with the true spirit of patriotism. DK District in-Charge Minister and State Minister for Forest and Ecology B Ramanatha Rai  unhurled the National Flag.

In his Independence Day address after receiving the Guard of Honour, Rai said “For safe guarding our country we should give up our linguistic, regional, and religious differences and only safeguarding the country should be our aim.”

He later said that the state government will work to maintain peace and harmony in the society. Along with giving justice to all the communities it will work for the welfare of people of all religion and communities.

We have achieved a lot of progress. Due to the schemes like Anna Bhagya and Ksheera Bhagya it has shown that the government caters the needs of people of all the stages and along with this there is a lot to achieve. Hence I request everyone to join hands with the government.

“The government will try for the betterment of district Wenlock hospital and improvising the third stage of the fishing port. It will conduct revenue adalats called ‘Kandaya Adalat’s to solve the impending issues of people pertaining to the revenue department and to curb the naxal menace importance will be given for the development of Naxal affected areas. We have given one crore rupees for constructing Abbakka Bhavan in Ullal.”, he added.

The dignitaries later on felicitated Vice Admiral BR Rao and Late.Vice Admiral Derric Castelino for their heroic service they rendered for the nation as a part of Air Force.

In the march fast competition that was held as a part of the independence day celebration NCC Army Wing bagged the first prize while the NCC senior Air Wing bagged the second prize.

The independence day was celebrated in the congress office at Hampankatta by hoisting the  flag in front the office. The district incharge president Ibrahim Kodijal unhurled the flag