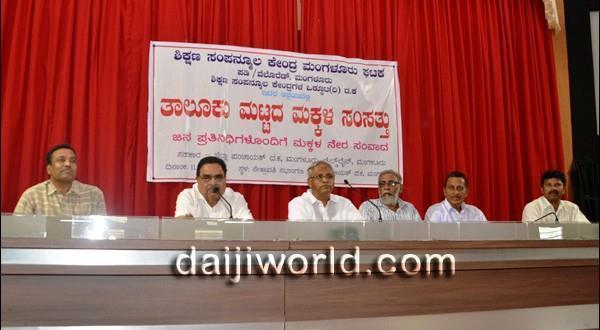 Mangalore, Jan 11: In a unique interaction, children from various schools took part in a live question-answer session with people’s representatives at Netravati auditorium of DK zilla panchayat here on Saturday, January 11. The event was organized by district education resource centre and other associations.

The children from various schools in the district asked several questions to district incharge minister Ramanath Rai, Mangalore South MLA J R Lobo, Mangalore North MLA Mohiuddin Bawa and other officials, with regard to various problems faced by them in their surroundings.

The first question of the session was raised by Asfan of Konaje Padavu Governmnet School, who asked the leaders if there were any special facilities for physically challenged students in schools and if not, would it not create problems for them. In response, MLA J R Lobo said the government has been planning to start a separate school for physically challenged students and also the regular schools have also been directed to offer special facilities for such students.

Arpitha, a student of Government High School, Babbukatte, Permannur urged the MLA to do the needful with regard to the lack of seating facilities in the school as teachers have been saying that there is some RTC problem and that the facilities cannot be modified or extended. Accepting this request, the MLA promised the students that he would get in touch with the revenue department and discuss with the officials and do the needful.

Akhilesh, a student of Konaje UBMC School complained that his school has students upto 7th standard but only two teachers. In response, minister Rai promised to look into the matter seriously and take appropriate measures.

When a question on increasing number of crimes on women was raised, Ramanath Rai said, “Atrocities against women are increasing at an alarming rate, and we have been doing our best to resolve this issue. The government too has taken steps to take stringent action against the culprits.”

To a question on communalism, Lobo said, “Communalism is a major issue in the society today. Not only politicians but other leaders also try to divide society on communal lines.”

The minister and the MLAs also replied to various other questions raised by the students, on issues related to cleanliness and so on, and suggested solutions and made promises in certain cases.

Officials Hassan Saheb, Renny D’Souza, Moses Jayashekar and others were also present on the dais.