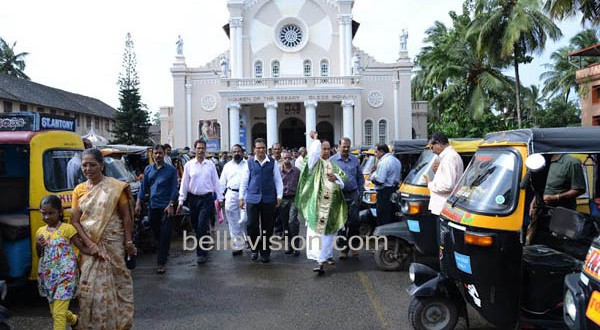 Speaking on the occasion, Monsignor Denis said, ‘We are proud of two Christian representatives MLA J R Lobo and MLC Ivan D’Souza in our midst and they are always keep low profile, work for poor and needy, who are reachable to all,’ said Monsignor Denis.

MLA Lobo said that men’s hostel is essential for the community, as they have come from far-flung areas to earn their livelihood in city.  It also provides secured accommodation for working men.  He also assured his assistance in this regard.

MLC Ivan D’Souza, being a member in the governing council of St Christopher Association also assured of his mite for the welfare of hostel inmates.

The Association member’s children who secured distinctions in studies were awarded cash prizes during the programme.

MACO Society’s directors who are also members of Association were felicitated on the same occasion.

Earlier, Thanksgiving Mass was offered at the Cathedral by parish priest Fr J B Crasta and other clergies.  The clergies also blessed the vehicles at the parish premises.