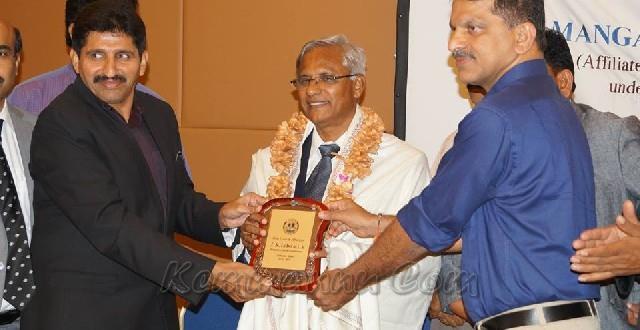 Doha, Sep 17: The enthusiastic Mangaloreans who had gathered in the Ras Laffan Hall of the Concorde Hotel here on Friday September 14 had an opportunity to meet and talk with a visionary leader who has risen to the greater heights through sheer hard work, commitment and selfless service. He is a rarity both among politicians as well as bureaucrats. John Richard Lobo, popularly known as J R Lobo again proved that he rules the hearts of the Mangaloreans, not only in Mangalore but across the globe.

The sitting MLA from Mangalore South assembly constituency placed his vision before the gathering and sought the support of each and everyone in making not only his constituency but entire coastal belt a model region in governance, development, infrastructure, tourism etc. Those who have seen him closely as a bureaucrat surely know that his works have always been louder than his words and he walks the talk.

It was a well-planned evening by Mangalore Cricket Club (MCC) along with other Karnataka Associations in Qatar wherein J R Lobo first placed his vision, motto and plan for the development of the entire coastal region and later discussed the same with the gathering, took up their opinions and assured to implement what he has already planned.

The evening began with an introduction by the compere of the evening Reena Castelino which was followed by a welcome address from the MCC president Sunil D’Silva. Later presidents of various Associations such as Karnataka Sangha, Tulu Koota Qatar, Bunts Qatar, Billawas Qatar, Kundapur Muslim Welfare Association, South Kanara Muslim Welfare Association etc escorted MLA J R Lobo to the dais. Former president of MCC Richard D’Souza then presented a brief profile of J R Lobo to the gathering.

It was then the turn of J R Lobo to address the gathering. He began speaking Tulu and expressed his happiness that expats from the coastal belt of Karnataka have created a ‘mini Mangalore’ in Qatar. He then placed before the gathering his plans for Mangalore in particular and undivided Dakshina Kannada in general. He spoke at length about creating world-class infrastructure by building better national and state highways which will enable better connectivity, development of Mangalore International airport, fisheries port, creating more employment opportunities to the youth through various initiatives, upgrading the Central, Kadri, Kankanady, Urwa, Urwa Store and Suratkal markets, building a proper service bus stand and providing the state-of-the-art, proper arrangements for solid waste management etc. He particularly spoke about making Mangalore region a tourist hub specially by envisaging and creating an international sports city which will attract people from across the globe. “Our region is rich with talent, education, resources. But somehow we have failed to tap our potentials. Our leaders in the past, despite their noble intentions and commitment, have failed to build and promote Brand Mangalore. The perception within Vidhana Soudha is that people from Dakshina Kannada are intelligent, educated and hence Mangalore is a developed region. So whenever development plans are chalked out at the government level, the leaders of Hyderabad-Karnataka region or Old Mysore region bag lion’s share. The leaders from these areas are vociferous and they are quite powerful at the government level too. But leaders from the coastal belt are usually docile and do not wish to fight it out. Hence most of the times even the best of the plans charted out by our leaders remain only in the books,” he said.

Later it was question-answer session wherein gathering was given chance to discuss various issues with the MLA. To a question about exorbitant airfare charged by Air India Express, the only direct flight to Mangalore, and possibilities of introducing more carriers to Mangalore, the MLA said that in today’s times it is not exactly possible for the government to control prices of the airlines. It’s a competitive field and hence prices are decided based on demand and supply. “However, this could be controlled by breaking the monopoly and introducing more carriers to Mangalore. When more players enter into the market, there will be cut-throat completion which will ultimately lead in reduced prices. Though Mangalore airport has a runway which can accommodate wide-bodied aircraft, it does not exactly meet the global standards since it is a table-top runway. The Mangalore airport director has already spoken to me about extension of the runway for which land is yet to be acquired. Once the land is acquired, the runway will be extended and wide-bodied aircrafts will then be able to land in Mangalore airport without any safety concerns. But this is a lengthy and costly process and will take some time before it is realised,” he added.

A specific query was raised about the proposed power plant at Niddodi and whether MLA supported it or opposed to it. Replying to this query MLA said that the project was envisaged and finalised long ago. As per the new Land Acquisition Bill that was passed by the Union Cabinet a few days ago, any project could be realised only if 80% of the people agree to sell their land. Further the compensation to the land owners must be thrice the market price. “Speaking specifically about Niddodi, I believe that there are serious environmental concerns which should be taken into count. We cannot have development at the cost of nature and I personally oppose any such things. But we always have chance to have a gas-based power plant since it has minimum implications on the environment. The environmental issues, agricultural land, compensation, rehabilitation, employment, type of plant etc will be studied deeply and only then a final decision would be made,” he assured.

Regarding the proposed Netravati diversion project which has already been approved by the previous government, the MLA said that at no cost such a project will ever be allowed. “It’s one of the most dangerous projects ever envisaged and could bring about many environmental issues specially with regards to the Western Ghats. So this project will not take shape. I have already requested the chief minister to initiate a deep study by environmental experts and I sincerely hope that their report would be in favour of the people and enable us to scrap this project,” he said.

There were quite a few questions about various issues bothering the locals as well as NRIs such as job opportunities, erecting good footpaths, roads, connectivity to Mangalore International airport, a permanent solution for Pachanady garbage plant, possible reopening of Brahmvar sugar factory etc. The MLA answered all the queries and assured that the concerns of each and everyone will be heard. “With regards to the developmental works, I have already informed my team. They have been given time-frame of three and half years to complete all the projects that we have already envisaged. I have my staff in Mangalore office and then I have already appointed a specially staff in Bangalore just to make follow-up with the government and various governmental institutions. I will personally be available to anyone in my office whenever I am not engaged in other programmes. Have patience. I will surely meet your expectations. I have been voted by all the communities and people from all walks of life. People have reposed trust in me and my abilities. Hence they have elected me even though I am a novice in politics. I will use all my bureaucratic experience and contacts in making Mangalore a model region and a safe, better place to live for all. Brand Mangalore will be marketed and if you will see drastic changes in the city planning, working of Mangalore City Corporation. I have already requested all the MLAs from the coastal region irrespective of the party to come together and hold meeting at least once in two months so that we chalk out plans, follow them up and implement them for the betterment of the people and society,” he assured.

Later he was felicitated and was presented with the memento by representatives of each of the Association present.