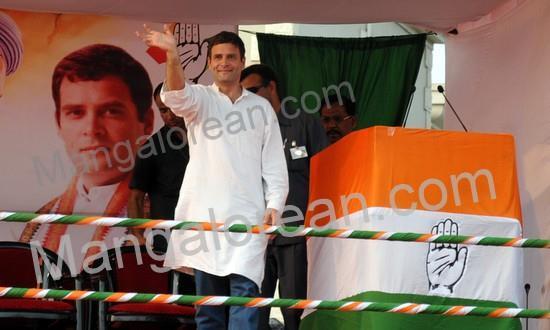 Mangalore Should be Popular in the Entire World – Rahul Gandhi

Prior to the arrival of Rahul, the congress party workers held rally from various places which culminated at Nehru Maidan.

Addressing the gathering Rahul Gandhi said that Karnataka is a developed state in the country. Mangalore is famous for educational institution and Bangalore is popular in the world.

He further said that to make the state popular, people of the state along with the congress party have struggled a lot. When we talk about social revolution, social justice, and the welfare of the poor people the congress party has taken a number of steps in that direction. Congress has nationalized the banks, in Bangalore educational institutions were opened, when Karnataka became strong, the BJP came into power and destroyed the state.

He also said that for the first time in the history of Karnataka, a chief minister went to jail and that is the contribution of BJP in Karnataka.

BJP has given corrupt leaders to the state. When the BJP leaders go to other states they talk about Congress corruption but fail to see their own leaders who are involved in corruption. BJP is seeing corruption in the Congress party but if they see the history of Karnataka they will come to know the corruption of BJP. Let BJP leaders go to Bellary to know who looted the mines.

Speaking on the development of the district, Rahul said that Mangalore has the capacity and potential being a port city. We need to bring a revolution in the Education sector and create more jobs. In Karnataka state we need to make Bangalore and Mangalore popular in the world. He urged CM Siddaramaiah to focus on Mangalore and make it famous in the world.

Congress and BJP has lot of difference, the Congress party is moving forward bringing unity among all the people of the country. The BJP is creating misunderstanding between religions, encouraging communalism and dividing the people on the basis of religion, it is making the Hindus fight with Muslims, Christians fight with Muslims and Hindus. The BJP encourages people of different states to fight with each other,they have even assaulted women in Mangalore. The Congress party is not a party, but a way to take all the citizens of this country together with unity and harmony towards development and success.

In Mangalore there is good infrastructure, your focus should be to make Mangalore a famous place in the world. Speaking about development, he said that there is a difference between BJP and Congress. We do not want to create fights in the name of religion. We want unity, peace and harmony in the country.

We will contest the election with unity and we will win the elections. BJP want to make the country congress free. Congress is not only a political party but a thought, and a old thought, that is, ‘In India all are one’, people are more important than leaders who take the nation forward in the real sense. we can live with unity and harmony and no one can eliminate unity and harmony. When there is development people will live in peace. Whoever tries to eliminate congress from the country they will be eliminated.

From the past 10 years we have done many development works. We have built roads three times more than the BJP. By keeping the welfare of the poor, the adivasis, weaker section and the people of BPL we have provided education and food we have started Colleges and universities. We want everyone to develop, not only the elected people, politicians or the rich. We have worked for the welfare of the people. Now people can access and get any information. We have brought the Lokpal bill, so that the people can get justice. BJP attempted to stop the Lokpal bill from coming into force.

Further briefing on the primary election, as a first step to bring changes in the party, the party workers have been given the right to chose a able candidate to contest the Lok Sabha election and you have elected Janardhan Poojary as your favourite candidate. Let him be victorious in the forthcoming elections, he wished.

He emphasized that the party members deserve more power, especially women should be given more power. He also said that we want to empower women and we will strive for 50 per cent representation of women in the Parliament and all assemblies.

We brought the women’s reservation bill with 33% reservation, the opposition tried to kill the bill. In Panchayat raj we have reserved 33% for women. Our aim is to give more and more power to everyone. The opposition is thinking to give power to only one person. If we come to power we will guarantee the women of 33% reservation and together with all the people of the country we will march forward, Rahul assured.

Rahul also said that in 10 years we have lifted 15 crore people from below the poverty Line (BPL). We are aiming to lift 70 crore working class people who are employed in a variety of jobs including electricians, security guards and auto drivers. We want to uplift them. Their children are not getting seats in universities. Our aim is to change the education system and bring revolution so that 70 crore people should get university education. We will provide free medical treatment, pension facilities, housing facilities and every Indian should have a roof over his head.

For the youth we have done a good project, From Delhi to Mumbai – Chennai – Bangalore and Delhi to Kolkatta we have started the Industrial corridor. We have started Dedicated Freight Corridor railway lines. Through these corridors we can create millions of jobs and youth from Mangalore, Bangalore and other states will be benefited.

Previously the manifesto was prepared in the dark, but now we have prepared the manifesto by consulting 5 lakh people. We are not preparing our manifesto anymore in the dark. In the last election the people of DK have supported and helped to win more seats and brought Congress to power in the state. Bring UPA 3 to power in the center and we will lead the country towards development and success.

Addressing the gathering KPCC president G Parameshwar said that the forthcoming election is important. Voters should think before casting their vote as to which party they should vote. Congress has 128 years of history, many congress leaders have sacrificed their life for the country. Since its inception, the Congress party did not change its policy. Congress wants to provide a respectful life to every citizen. Congress has brought the green revolution in the country. When the telecommunication revolution started 10 years ago, there were 3.5 crore mobile users, but now it has reached to 96 crore users.

He further said that Modi came to Karnataka and spoke about congress corruption such as 2 G scam etc. Modi could not see Yeddyurappa, Ananth Kumar and Katta Subramanya sitting very next to him. He did not remember their corruption. Congress party wants unity and harmony in the country. Recalling the incident of a Lady corporator, while campaigning for the Lok Sabha elections in Kodikere was harassed by the Sangh Parivar members. BJP is creating enmity between religion. The congress wants everyone to be treated equally. Rahul has promised to provide jobs to the youth which he will surely fulfil. He urged all the voters to cast their valuable vote to a able leader who can represent the district in the parliament.

Chief Minister Siddaramaiah speaking on the occasion said that in the BJP there are many senior leaders, who are eligible for the prime ministers post but they have been sidelined and BJP has finalized Modi has their PM candidate because Modi is a Hardcore RSS. Let BJP spend any amount of moneymoney by giving advertisements to promote Modi. The people in the country will not vote for Modi and BJP will not come to power.

CM further said that BJP says that everywhere there is Modi wave, but when he had gone around the state, he did not find any Mode wave. If there was a Modi wave, the people of the coastal district would not have attended todays programme in large numbers. There is proof that in the last Assembly elections, Congress had won 7 seats out of 8 in the district. BJP is highlighting Modi because they do not have anyone else to show. In the history of Indian politics, if any CM has gone to jail then it is Yeddyurappa, 13 of their ministers were involved in corruption.

He also said that BJP do not have any right to speak about the poor people, because they did not help the poor. He said to take a pledge that all the voters will cast their vote for the right candidate and bring victory to Poojary.