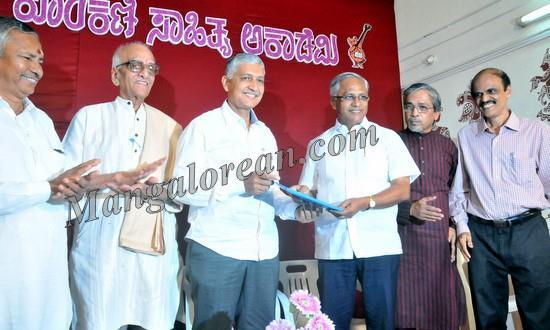 Mangalore: The newly appointed president of Karnataka Konkani Sahitya Academy Roy Castelino took over the charge during the function held at the Academy office premises here on March 6.

The programme began with an invocation. Registrar of Konkani Sahitya Academy Devadas Pai welcomed the gathering. Pai also mentioned in his introductory speech that Roy is a builder by profession but for Konkani Sahitya Academy he is the builder of the Konkani team. He also briefed about Roy’s contribution for the Konkani Language through Konkani Prachar Sanchalan and his efforts in introducing Konkani in Schools.

MLA of Mangalore South Constituency J R Lobo handed over the appointment letter to Roy Castelino on the occasion. Addressing the gathering Roy Castelino said, “MLA J R Lobo is my role model and also for the entire district. As president of the KSA, I will work for the total development of the Konkani Language. We need Litterateurs, poets, writers and most of all readers to promote Konkani. Through Konkani Prachar Sanchalan we need to promote Konkani in all the schools in the state”.

Speaking on the occasion Lobo said that the KSA will be successful under the leadership of Roy Castelino compared to other academies. When a person attains any power, it is obvious to feel happy but the same person will have more responsibilities on his shoulders. Konkani has been included in the 8th schedule of the Constitution of India. If we need to strengthen Konkani, our children should speak Konkani. If we want to retain any language or culture we have to speak, write and practice. He further said that we feel happy that Shetty’s speak Tulu language, Kodavas speak Kannada and Malayalees speak Malayalam where

ever they are but our Konkani people speak Konkani in English. Let our community give importance to Konkani language and take it to the next generation.

The former president of KSA Basti Vaman Shenoy speaking on the occasion expressed his confidence in the new president. He recalled that Roy is a capable person to take over the mantle and lift the Konkani flag high. Through Konkani Prachar Sanchalan Roy has already worked and is working for the development of Konkani.