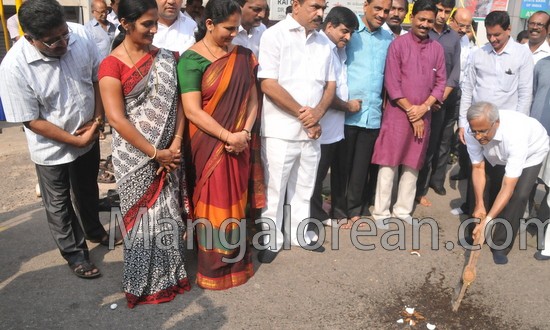 Mangalore: MLA J R Lobo inaugurated the Road work from Ambedkar Circle Jyothi to Bunts hostel here on November 4. The road work has to be completed within four months at a total cost of Rs 1.94 crore.

Prior to the Puja there was misunderstanding between the corporator of Mangaladevi Premanand from BJP and Vinay Raj from the Court ward for erecting a banner and not inviting the Local MP Nalin Kumar Kateel. Premanand said that the road development work does not belonged to any political party, it is purely for the development of the city. In the development work one should not play dirty politics.

Later MLA J R Lobo arrived at the spot, he convinced the opposition corporator Premanand and said that the mistake will not be repeated, may be the court ward people erected the hoarding, but we respect all the corporators and the opposition leaders.
Later the religious head performed the Guddali Puja.

After the inauguration, J R Lobo speaking to the mediapersons said that the main road from Ambedkar Circle Jyothi to Bunts hostel is in pathetic condition. To develop this road the state government has sanctioned Rs 1.94 crore in the second phase of the development work. The total amount will be Rs 2.19 crore for the concretization of 312 meter road work. The road will be 15 meters wide including the median. The work will be completed in 4 months as it is a busy road in the city. The contractors Gokuldas Bhandarkars have assured to complete the work on time. In the city most of the roads have been concretized now the Ambedkar Circle Jyothi to Bunts hostel will also be concretized.

When asked about the digging of the roads after concretization, Lobo said that earlier the contractors did not shift the drainage or electrical pipes and when there was problem they used to dig the road for repairing the fault. Now we have changed the working pattern and are shifting the drainage as well as the electric pipes before concretization of the roads.

Ivan speaking to the mediapersons said that the Mangalore city corporation under the leadership of Mayor Mahabala Marla is concentrating the roads along with the development of the city. If the roads will be developed the entire city will develop. Our main aim is to develop the city and not to play any politics.

Mayor Mahabala Marla said that for the smooth work of the roads, we have taken all the measures. We will develop the roads in all the 25 circles in the city to solve the traffic problem. There is no politics in the development work. In 5 years we will work for the development of the city and for the convenience of the people.