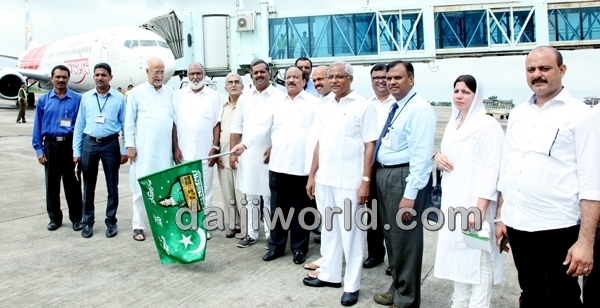 State minister for infrastructure development, information and Haj Roshan Baig flagged off the first flight of Haj pilgrims at the airport, in the presence of health minister U T Khadar, MLAs J R Lobo and Mohiuddin Bava, former minister B A Moidin and others.

From Thursday August 28 to September 1, five batches of Haj pilgrims will leave from the city in evening flights. From Bangalore, 16 batches will leave for Haj between September 12 and September 27.

Roshan Baig also informed that 5000 pilgrims have registered from the state this year, among whom 700 are from Mangalore.

J R Lobo announced that Kuwait-Mangalore flight will resume from October 27 this year.

U T Khadar said that this year, the health ministry has sent seven doctors, 14 nurses and a pharmacist to Saudi Arabia to look after the medical needs of the pilgrims. This has been done mainly to prevent exploitation of pilgrims by private operators in the name of healthcare, he added.