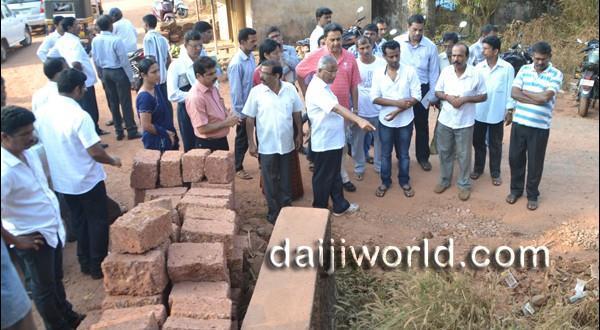 Mangalore, Jan 14: During the MCC elections last year, just before the electoral code of conduct came into effect, the main road that connects the national highway to Shaktinagar via Bikarnakatte was dug up for the purpose of road extension and concreting.

Later on, as the electoral code of conduct was imposed, although the road was dug up, the work remained pending.

Some of the locals alleged that a political party with a view to grab votes, had dug up the road to show some sort of development in the town. But as the elections were nearing, the work had to be stopped.

It has now been over a year that the road has remained untouched and the residents of the locality have been suffering from the rising dust levels. The residents of Shaktinagar too have suffered a lot as it was a connecting road to reach the city, and they were forced to take a longer route to reach their destinations.

After repeated requests from the public, the work was resumed around two months ago and it is indeed a relief for the residents.

The work is being carried out at a quick pace. Mangalore South MLA J R Lobo along with DC A B Ibrahim, MCC commissioner Ajith Kumar Hegde and others visited the spot and inspected the work that is under progress. The work is close to completion and it is likely to be finished at the earliest, they have assured.