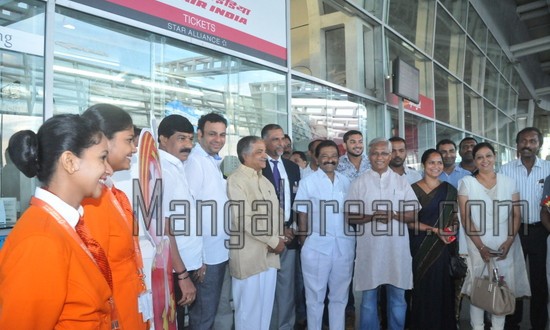 Mangalore: The Mangalore – Kuwait direct flight was reintroduced here on October 27. The first flight from Mangalore to Kuwait took off at 7.25 am from the International airport, Kenjar with MLA J R Lobo accompanied by his wife.

Speaking to the mediapersons MLA J R Lobo said that the Mangalore – Kuwait direct flight was cancelled in February 2014 due to the lack of sufficient passengers from Kuwait. “Eight months ago when we discussed about the cancellation of flights to Kuwait, Air India officials said that the Mangalore-Kuwait sector is economically weak and there are only few passengers flying from Kuwait and not enough aircraft to fly to Kuwait.”

He further said, “When I discussed the issue with R Roshan Baig, the Minister for Infrastructure, he had taken me to Delhi to meet the Union Minister of State for Civil Aviation of India, G M Siddeswara. Along with Civil Aviation Minister Siddesh, we met the Air India President and the Chairman and requested to reschedule the flights. The Air India Chairman and Managing Director permitted to reschedule the Mangalore-Kuwait flights during the winter schedule.”

He also stressed that to start flights to any destination is easy but if the minimum number of passengers are not available that sector cannot be retained. He urged all the passengers to patronize the sector and retain it. “We have taken all the measures to reschedule flights and it is in the hands of the passengers who fly in this sector. People who are in Kuwait should use this service and retain it. When we introduced the flights to Dubai, we started with one flight but now every day, we have three flights flying from Dubai to Mangalore because people have patronized this sector.”

He also said, “I am flying to Kuwait by the rescheduled flight. I will meet various organizations and request them to patronize the sector and retain it. Indians in Kuwait should invest in Mangalore and develop the district so that more people from Kuwait will use the services of direct flight.”

Lobo thanked the Chief Minister Siddaramaiah, Minister R Roshan baig, Union Minister of State for Civil Aviation of India G M Siddeswara and all the people who were responsible for restarting the Kuwait-Mangalore flight.
Nagesh Shetty (Manager Air India, Mangalore International airport) handed over the boarding pass to MLA J R Lobo.
Later, Lobo along with his wife Philomena proceeded towards the check-in counter to fly to Kuwait. He will be back on November 3.