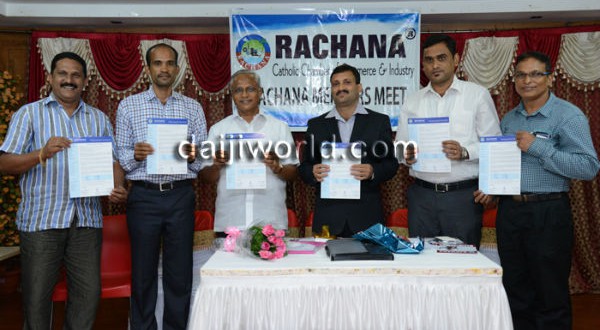 Mangalore, Sep 28: Rachana, a forum of Catholic Chamber of Commerce and Industry, organized meeting for it’s members and launched Rachana Vision Project at Hotel Maya International, Bendorewell on September 28.
The event began with invocation, president John B Monteiro welcomed the guests and introduced them to the audience.
Secretary Anil Lobo presented the annual report card.
President John B Monteiro briefed about the developments and upcoming events of Rachana. He said, ” After AGM the governing body has new vision. The dream is to have our own office, as of now we are operating from Bishop’s house. I need the support of the members of Rachana to make it a reality. Rachana awards are scheduled on November 11, 2014. Instead of three members, this time it has five members in committee.”
MLA J R Lobo inaugurated ‘Rachana Bulletin’ a quarterly bulletin of the Catholic Chamber of Commerce and Industry to raise funds and to meet the expenses of the forum. He also inaugurated an appeal to the people for goodwill.
He addressed the gathering and said, ” Rachana Bulletin is very useful, as it will give more details and clarity to members of Rachana. To organize any event, support of the members is very important. It is indeed good vision of the new Governing Body Members to have own office. All the catholic society in the city has to prosper and help the others, as other catholic families of other district are poor and face many financial problems.”
Roy Castelino, President of Karnataka Konkani Sahitya Academy, inaugurated the coupons and also assured Rs one lakh as his contribution for building of the new office of Rachana.
The new office-bearers elected for the year 2014-2015 are:
President : John B Monteiro
Vice-president : Stany Alvares
Secretary : Anil Lobo
Joint Secretary : Raymond D’Cunha
Treasurer : Nelson Monteiro
Other Governing Body Members:Louis J Pinto, Dr Errol Pinto, Brain Fernandes, Paul Moras,Dr Norman Mendonca and Juliet Mascarenhas.