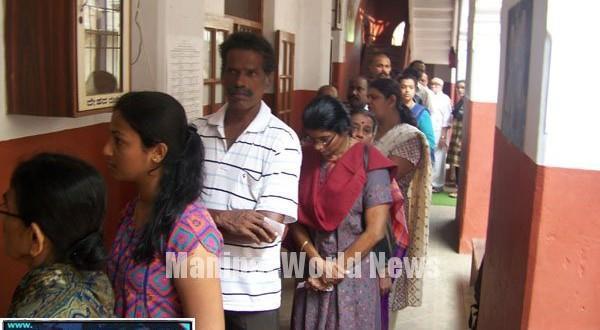 Mangalore, April 17, 2014 : Voting in Karnataka for all 28 LokSabha seats has begun at 7am on Thursday April 17. Nearly 4.62 crore people are eligible to exercise their franchise in the single-phase election in the state. Polling will continue till 6 pm.

People are seen queued up outside various polling stations in Mangalore. Congress candidate JanardhanaPoojary was seen standing in a queue outside a polling booth in Bantwal. He later exercised his franchise. Several people present outside the polling station were seen greeting the leader.BJP candidate Nalin Kumar cast his vote along with his wife at LadyhillSchool.Bishop of Mangalore diocese Dr Aloysius Paul D’Souza voted at Ganapathy High School.MLA J R Lobo and his wife were ones of the first ones seen at the polling booth. They cast their votes at St Theresa’s School, Bendore.

The run-up to the elections in Mangalore saw much drama and high-profile visits by national leaders including BJP’s prime ministerial nominee NarendraModi and AICC vice-president Rahul Gandhi.

Security has been stepped up for the polls. Polling will be held upto 6 pm.