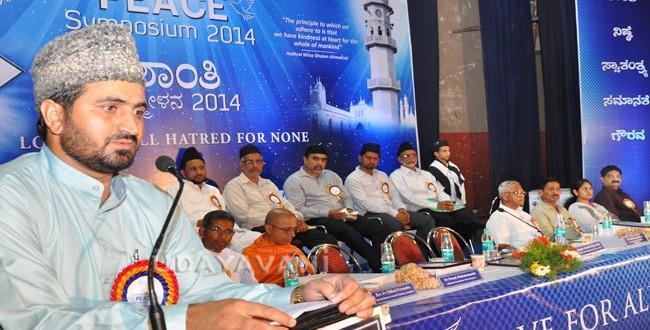 Mangalore: Peace symposium to spread the message of peace

Mangalore: Peace Symposium-2014 was organized by Ahmadiyya Muslim Jama’at to spread the message of peace at Town hall in Mangalore on Saturday, May 3.

Addressing the gathering, Rafeeque Beig Sahib, national president, Majlis Khuddamul Ahmadiyya said that it is the time to spread the peace message across the world. There is no religion greater than peace. Thus, it is important to nurture peace at home, which will then spread to the street, town and the nation.

“Islam has been targeted every often for the actions of some Muslim groups, who have tried to portray a most terrifying image of Islam with extremism and terrorism. At this juncture, truth about Islam should be brought out,” he added.

He further said that there is need for a joint effort to sustain peace when the world is becoming a global village.