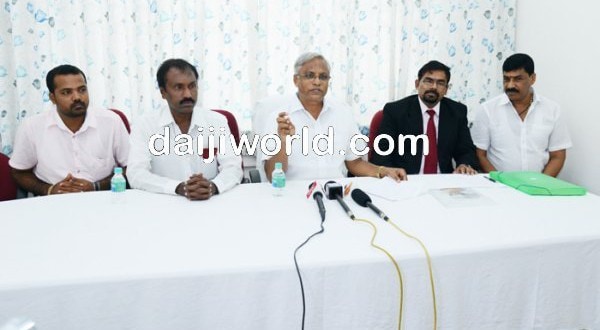 Mangalore, Sep 6: “Thousands of families from Karnataka are staying abroad and their children are studying in Indian schools. However, they are not allowed to appear for the CET examinations conducted by the government. So, the NRI merit students are deprived of Medical, Engineering and Nursing education in Karnataka,” said J R Lobo.

Lobo was addressing a press meet in his office here on Saturday September 6.

Speaking during the meet, he said, “In this direction, Saudi Arabia’s KNRI Forum, Jeddah has been in touch with forum president Roshan Philip Rodrigues and me. They have jointly submitted an appeal to the Karnataka Minister of Higher Education, R V Deshpande and the Minister has assured that he will respond after holding discussions on the subject.”

“The neighboring Kerala and Maharastra state governments have enabled the NRI students to appear for CET exams and obtain admission in government institutions. In Karnataka, however there is a rule that they should be students in the state at least for two years. Under such circumstances, it has become inevitable for NRI students to stay in hostels and study in Karnataka before appearing for CET,” he added.

“The financial position of most Kannadigas staying in Gulf countries is not as good. There is no security of job either. They spend all of their earnings in their motherland,” Lobo said. He equested that regulations be formulated like in other states and has assured that he will speak about it in the Legislative Assembly.

He has urged the state government to open a branch of Karnataka working unit of NRI Forum in Mangalore and also placed other demands which include:

*Solution to passport problems of the NRI’s
*Translation of documents
*Solution to problems faced by investors
*Help to families of NRI’s in their needs
*When low paid workers such as daily wage workers and house maids face problems, a communication should be arranged between their families and Indian embassies
*Arrangements to bring back Indians from foreign countries in emergencies and communication with families in Karnataka
*It is understood that several people of this region spend their nights near mosques or embassies for want of proper documents. The unit should take appropriate steps to address the problem.

Kuwait NRI Forum’s Roshan P Rodrigues, T K Sudhir and others were present during the meet.