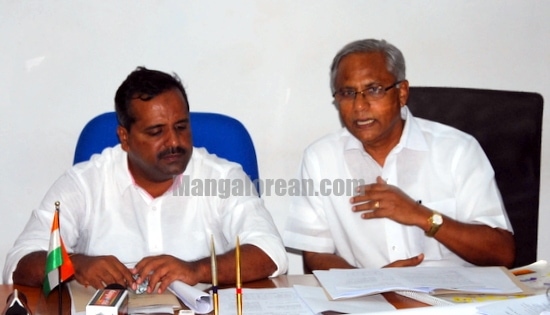 Addressing the mediapersons Lobo said that the people of the district are lucky to have a health minister from our own district- he has strived hard to bring new health projects to the state, especially to the district and has succeeded in doing it.
Lobo further kept two demands for the health minister – To upgrade the District Wenlock as a regional hospital and also to make it a model hospital. The second demand is to start a National Highway Trauma Centre because people from Chikmagalur and Davangere come for treatment to Mangalore. The present building is very old and it should be renovated and upgraded.

Responding to the demands Khader said that the district Wenlock hospital will have sophisticated Mortuary with all the facilities. Sewage treatment plant is also built and 99% of the work has been completed.

Khader further said, “Our intention is not to built more hospitals but to make the people in the district healthy and prevent diseases from spreading. The state government has taken all the preventive measures and initiative has been taken to avail medical check up for every citizen of the state. Every citizen has the right to know his/her health condition by doing medical tests. Once in a year free medical check up will be done for every citizen. Government has given importance to prevent contagious diseases. When the people will co-operate with the health department we can prevent many diseases. People should take initiative to prevent some kind of diseases. We need to make sure that the city is kept clean to avoid spreading of Malaria and other diseases”.

“Asha workers will be paid Rs 2,200 per month and the payment will be credited directly to their account. The government employees and their family members will be treated free of cost under the Arogya Sanjivini Scheme. The government employees will be given Identity cards and cashless treatment will be given”, he added..
District Surgeon Dr Rajeshwari and others were also present.