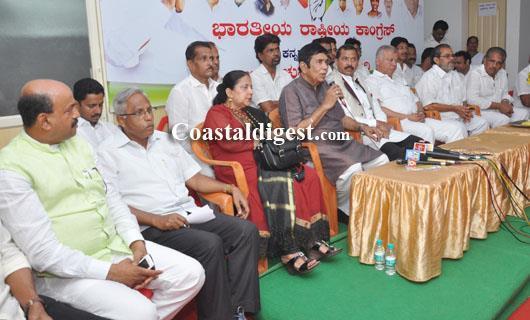 Mangalore, Apr 14: Lauding the growth and development of the coastal region of Dakshina Kannada, All India Congress Committee (AICC) general secretary and former chief minister of Goa Luizinho Faleiro said that the Mangalore model was better as compared to the Gujarat model, with its shining example of communal harmony and unity between religions and communities in the district.

Addressing a press conference here on Monday, he said that while the Gujarat model was marching backwards on the economic front, Mangalore was marching ahead in progress, education, banking and cultural ties. In Gujarat, the education and health indicators have gone down, and half population of women and children suffer from malnutrition. The Gujarat model stinks of Godhra and issues such as lack of potable drinking water and severe shortage of electricity, he said, appealing that the people of Karnataka should adopt Mangalore model of success as the development mantra for the state.

He said that the state government in Gujarat had miserably failed to implement certain directive principles such as right to education, information, employment and food security, which were brought on par with the fundamental rights by the UPA government. The Gujarat model is only for ‘crorepathis’ and industrialists, he criticised.

With regard to the growth of tourism sector in the coastal belt of the state, he assured that the Congress government would take necessary measures to improve the sector.

To a query on the recent revelations of former media adviser to Prime Minister Manmohan Singh, Sanjaya Baru, he said that the Prime Minister’s Office had already replied to the allegations. “The official reaction has come from the PMO. We are in a system where the party is real functionary and guides the government,” he added.

On the occasion, Mangalore South MLA J R Lobo said that the election campaigning in Dakshina Kannada constituency would come to a close on Tuesday with a ‘padayatra’ to be undertaken at 3 p.m. from Nehru Maidan to Urwa Market maidan.

Lok Sabha candidate for Dakshina Kannada B Janardhan Poojary will participate in the padayatra and a public campaign meeting following the padayatra, he informed.

Floral garlands and tributes were offered to the portrait of Chief architect of the Indian Constitution Dr B R Ambedkar to commemorate his 123rd birth anniversary on Monday.