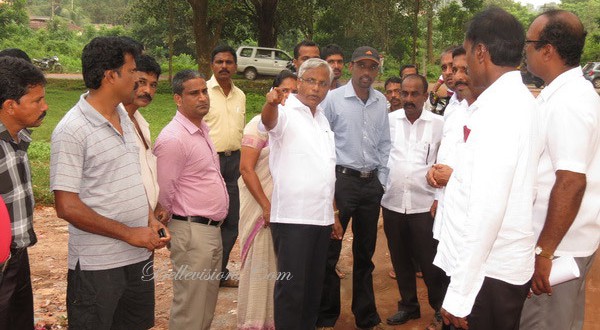 Mangalore, 21 Aug 2014:  MLA J R Lobo accompanied by senior railway officials visited the neighbourhood of Kongoor mutt, here on Thursday August 21, to inspect Kongoor dirt road that has not seen asphalt despite other roads in nearby localities are already paved.  The train-track passes parallel to Kongoor mutt road, and the periphery of road comes under the jurisdiction of railways and no developments can be taken up without their permission.

Kongoor neighbourhood has several households including a temple but sans any developments that has been freezed by railways fearing any damage to train track and tunnel nearby.  The railways operate goods trains almost daily on this vital link.

MLA Lobo, mayor Mahabala Marla and railways senior officer Elan visited the location on Thursday and held discussion to issue permission for civic body to pave the road.  Meanwhile, one has to wait and see for the future course of action.