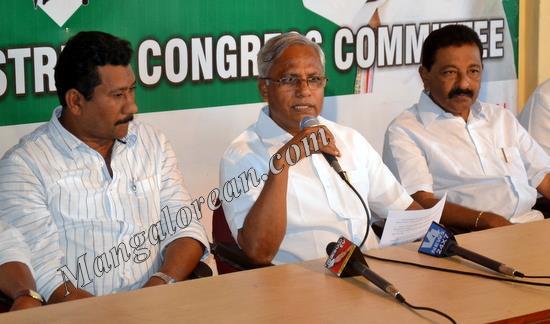 Addressing mediapersons Lobo said, “This is my first Press conference in the district Congress office after the elections. I am here to present the development projects which we have started in past 8 months and some of the projects we are going to start soon”. Lobo further said that the Congress government is very much concerned about the development of the district.

In 2013-14 under SFC grant Rs 926 crores has been sanctioned for the development of the footpath, To rebuild the main markets in the city, such as Urva market, Urva Stores, Kankanday, Kadri and Central Market project is getting ready and the discussions are on to take up these projects in PPP model or through the government. To rebuild these markets more than Rs 300 crores will be invested. It is a huge project and we need to follow the procedures properly.

For the smooth flow of the traffic in the city all measures have been taken and necessary arrangements made, we have installed signal lights at the main circles.

In Kadri park in the 7 acres land, musical fountain and children play area will be built in the old deer park. In the other park, flower plants and trees will be planted. The total cost of the project will be Rs 5 crores. The project will be completed within 18 months. The road in between both the parks will also be developed. Falnir Mathias Park will be developed and Rs 25 lakhs have been sanctioned for the same.

Regarding Railway crossing in Padil Bajal road underpass, Mahakali Padpu underpass and Jeppu Kudipadi underpass, the Mangalore City corporation should pay Rs 10 crores to the Railway department. We are trying to pay the said amount from the government to carry out the work. The old bus stand will be upgraded with the consent of the shop owners and the decision will be taken soon.

Permission is granted to open Health centers in Shaktinagar, Kadri, Padil, Yekkur, Jeppu, Bunder and Bengre at the cost of Rs 3.06 crores. Under National Fisheries Development Board Hyderabad 4 projects related to fisheries will be prepared. We have requested Petroleum Minister Veerappa Moily to sanction Underground electric cables. We have given a memorandum to start evening Engineering college for those who work during the day time, so that many students who are not able to pursue their engineering studies due to financial problems can get admission in this college.

We have submitted a memorandum for the development of tourism to the tourism minister. We will work for the total development of the district in 5 years of time, Lobo said.