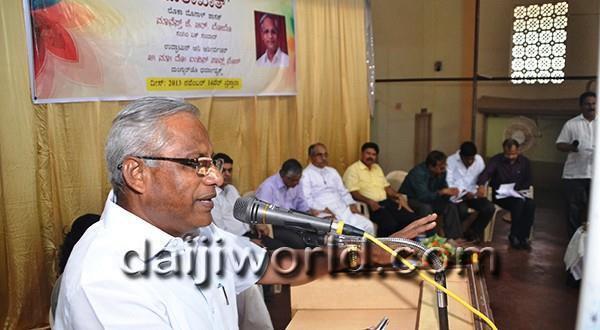 Mangalore, Nov 15: MLA J R Lobo interacted with more than 300 Christian leaders of the 19 parishes of his Mangalore South constituency in a unique “Meet your MLA” programme at the Rosario Cultural Hall, Bolar, organized by the Diocesan Laity Commission, to know the problems faced by them.bri

J R Lobo in his speech disclosed the immediate and long term plans he has for the city of Mangalore and sought the support of the people in the realization of these projects.

He also promised that he would do everything in his authority to pressurize the executive machinery to fulfill their genuine local needs and become a voice in the Legislative Assembly to solve their major concerns.

He also answered all the questions posed by the participants regarding road repairs, footpaths, Ration Cards, RTC, housing license etc. Lobo complimented this programme as true democracy and he also suggested to hold such programmes in all the constituencies.

M P Noronha, advocate, in his introductory talk explained the importance of the meeting which is meant for the success of democracy and for boosting the morale of their elected representative.

The Corporators of Mangalore Municipal Corporation, Lancelot Pinto, Jacintha Alfred, Gretta Asha and Sabitha Misquith were present with other dignitaries such as Jerald D’ Costa, the secretary of the Pastoral Parishad of the Mangalore Diocese.

The event was compered by Stany Alvares and moderated by Roy Castelino. Fr J B Crasta, secretary to the diocesan Laity Commission and the parish priest of Rosario Cathedral welcomed the gathering and Nigil Pereira, the president of the Catholic Sabha, Mangalore proposed the vote of thanks.

Louis J Pinto, Austin Peris, and others were present. The programme concluded with a lunch.