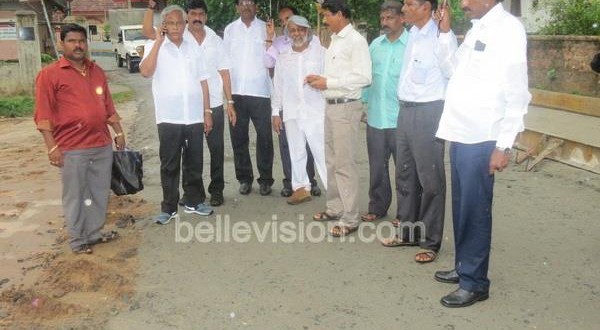 MLA Lobo also interacted with local residents, heard their complaints and gathered feedbacks from them.

The concreting of Jeppinamogaru main road is underway at a cost of Rs 1.30 crores under the SFC funds. MLA Lobo paid a visit to the spot and inspected the laying of concrete road and instructed civic body to strictly maintain quality at all stages.

The laying of concrete road was abruptly halted and the work has resumed recently for the relief of local residents.

The recently concreted Yekkur main road has been opened for traffic, while MLA Lobo viewed the construction and satisfied with the quality.

The bridge on this main road is very old and since being narrow it has been creating problems for the movement of vehicles. ‘Proposals will be sent for the construction of a new bridge across,’ said MLA Lobo.

The people of Adam Kudru were facing problems with regard to drinking water and this issue was already brought to the notice of MLA Lobo during his earlier visits. The locals were sometimes even forced to drink salt water. Hence taking this issue seriously, MLA Lobo instructed civic body to lay drinking water pipeline through Netravati bridge to Adamkudru.

The project has already begun. ‘The total estimated cost is Rs 17 lac and the work will be carried out at the earliest possible,’ said MLA Lobo.

MLA accompanied by traffic ACP Udaya Nayak visited the traffic diversion at Bendorewell that would ease congestion and also help the students to cross the road with more safety.  The speed breakers and zebra crossing would further secure the pedestrial crossing at this point.