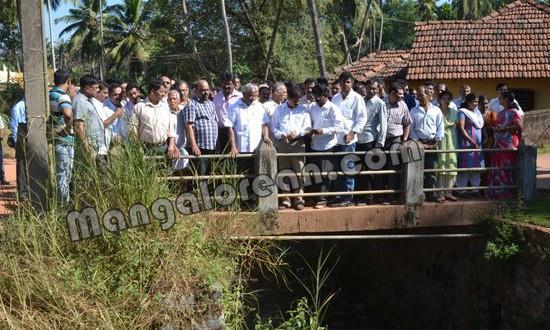 Mangalore: MLA J R Lobo along with Commissioner City Corporation Shanadi Ajith Hegde visited Pumpwell to listen to the grievances of the people in the area on December 12.

Lobo met the residents of Pumpwell to Patel House road and listened to the problems faced by the people. The City Corporation had acquired about 7.23 acres of land in Maroli and Kadri B villages during June, 2009 for the construction of a Bus terminal for Mangalore city But there is no any progress in the said project.

The acquired land is filled with mud and leveled by spending a lot of money. There has been no progress in this direction except filling earth in the paddy fields and leveling the land at a huge cost. After the acquisition of land and widening of the National highway the existed road adjacent to the National highway is in a pathetic condition, no any concerned authorities have tried to repair it.

School going children, working women, pregnant women and senior citizens find it difficult to walk on the road. Auto rickshaw drivers refuse to take passengers on this road because of the pathetic condition of the road.

From the past four years, we have been running to the City Corporation and National highway authorities for help, but in vain. There is no one who is ready to hear our plea nor any of the concerned authorities are ready to brief about the proposed bus terminal. Despite our efforts we have not been able to extract any information regarding the same.

There are rumours that the highway is being widened to enable vehicles to move at a speed of 80 to 100 KM per hour, NHAI has strongly raised objection to give direct access to the bus terminus and it is not in favour of a busy bus terminus so close to the highway. They have also rejected a suggestion by MCC to provide an underpass to connect the proposed bus terminus. With all the above reasons and lack of proper planning and understanding between the concerned stakeholders we are not sure whether the bus terminus will become operational in the near.

The residents demanded justice and urged the concerned authorities to repair the road as soon as possible. A memorandum was submitted to Lobo.

Receiving the memorandum Lobo assured to solve the problems as soon as possible and directed the concerned authorities to take the issue seriously.