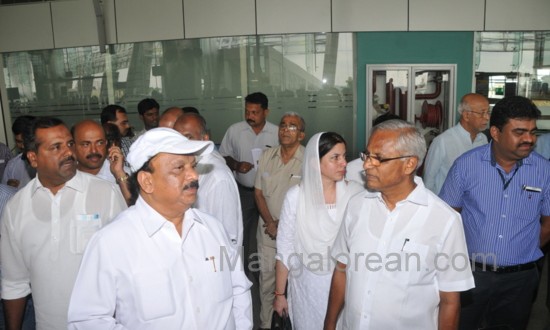 Mangalore: Minister for Infrastructure, Government of Karnataka, R Roshan Baig flagged off the first batch of Haj pilgrims at the International airport, Kenjar here on August 27.

Speaking to the mediapersons after the flagging off ceremony of the 130 Haj pilgrims from the Haj camp at Bajpe, Baig said, “This is the first ever batch from Mangalore in the entire country leaving to Haj. From the entire state, there are 5000 Haj pilgrims, out of which 700 are from the district. In the first batch, 130 Pilgrims will go to Haj. On September 12, Chief Minister Siddaramaiah will flag off the flight to Haj from Bangalore.”

Roshan Baig further said that the Kuwait-Mangalore flights will be restored from October 27, 2014. He stressed, “It is due to the efforts of MLA J R Lobo, who took the initiative and took me to Delhi to meet the concerned authorities, and we could get the work done”.

Health and family welfare minister U T Khader speaking on the occasion said, “From the health ministry 7 doctors, 14 nurses and 1 pharmacist have reached Saudi to provide medical assistance to the Haj pilgrims. The ministry has already initiated steps to curb exploitation of Haj pilgrims by the private operators.”

130 Haj Pilgrims boarded the flight, out of which 3 were from Hassan and 127 from Mangalore.