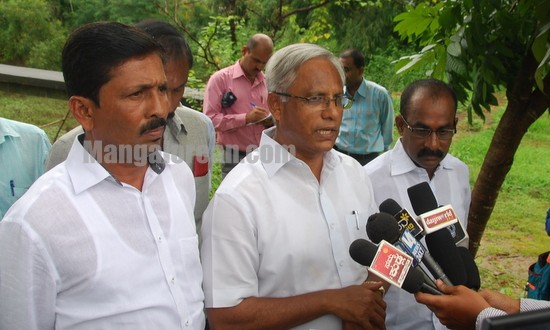 Mangalore: Media Should Not make Big Issue on Youth having Intimate Moments in the Park- MLA J R Lobo

Mangalore: MLA J R Lobo along with Mayor Mahabala Marla visited Kadri park to check about the present condition of the park, here on August 28.

After visiting the park, MLA J R Lobo speaking to the mediapersons said that Kadri park is the most important park of the City. Some media houses have published the pathetic condition of the park and also about the illegal activities taking place there. Lobo further said, “Due to the recent incessant rain the maintenance of the park has been in a poor state. We will give importance to the cleanliness and appoint people to maintain the park. The park will be cleaned within a week and a meeting will be called with the concerned authorities along with Deputy commissioner A B Ibrahim”.

Further commenting on the issue of youth coming to the park, Lobo said, “the park is for the public to come and spend some leisure time with their family and friends. We are living in the modern world and the park is meant for the children, youth as well as the elders. There are no restrictions for anyone in spending their time with their loved ones. Recently some media had published that youth come to the park and enjoy, youth also have freedom to come to the park with friends. If 0.001% youth make mistake, we should not blame rest of 99.999% of them. As far as the youth behave and don’t create harm to anyone or involve in vulgar acts it is not necessary to click photographs of the youth/couple who enjoy some special moments of their life or relax in the park and make it a big issue”

Lobo further said, ” We have our own responsibilities in the society, by highlighting one incident we should not blame everyone. The security in the park will be increased. We have already fixed additional lights in the park. At 8:00p.m the park will be closed and the horticulture authorities will make sure that everyone vacates the park. Night police along with 2 women constables are assigned to make daily visits to the park. There is no need to be over excited about the pathetic condition of the park , because within a week the park will be cleaned and all measures to complete the development work of the park will be undertaken”

Mayor Mahabala Marla speaking on the occasion said that measures will be taken to clear the grass in the park. He also said that the Mangalore City corporation had started kids train, seating arrangements for the visitors and fixed lights in the park. At present the file regarding the kids train is missing in the MCC. The kids train was the asset of the MCC but now the train has disappeared from the park which we need to find out.

Mayor also said that within a week the grass will be trimmed and a meeting will be called to discuss about the development of the park. Regarding youth coming to the park to spend their time, Marla said that Mangaloreans are well educated and youth coming to the park is common as long as there is no harm to others. Clicking their photographs and making it a big issue is not good, he said.