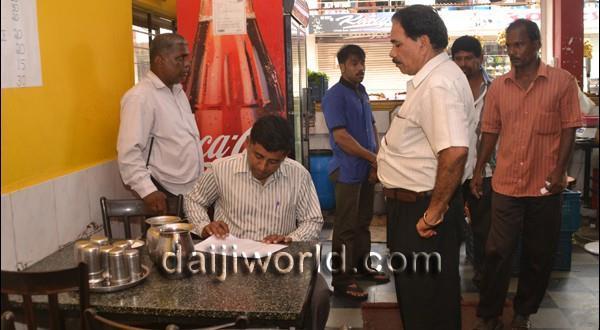 Mangalore, May 20: Acting on the decisions taken in the meeting chaired by health minister U T Khadar along with MLA J R Lobo, MCC commissioner Ajith Hegde, mayor Mahabala Maarla and the MCC officials recently with regard to controling the spread of diseases ahead of monsoons, three teams have been formed to carry out inspections in hotels, restaurants and roadside vendors, to maintain cleanliness and hygiene so as to control the spread of diseases like malaria.

Teams have been formed for Mangalore Central, Mangalore South and Suratkal. Accordingly, on

Tuesday May 20, a team led by MCC health officer carried out a raid in various hotels and restaurants in the city.

The team comprising about six officials raided various hotels including Hotel Vrindavan, Hotel Sri Ganesh, Hotel Swagath, Jain Restaurant, Hotel Bombay Lucky and Hotel Aradhana. Among these hotels, the trade license of Hotel Vrindavan was seized for violation of norms. Jain Restaurant was found to have counters selling groceries inside, and officials urged the owner to maintain it either as a hotel or a grocery shop.