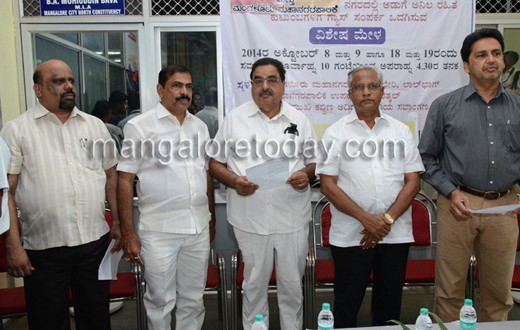 Mangalore, Oct 08, 2014: DK District in-charge Minister B Ramanatha Rai symbolically handed over gas cylinders and cooking ranges to six beneficiaries at the City Corporation Hall on October 8, Wednesday to mark the launch of ‘Kerosene Free City’ Campaign. The Minister also watered a plant as part of the inaugural of the campaign.

Speaking on the occasion, the minister stated that the administration will ensure that every ration card holder has a cooking gas so that the city can be made a kerosene free zone.

He informed that awareness camps would be conducted and those who do not have an LPG connection can apply for the same at the camps.

JR Lobo, MLA of Mangalore South in his address while appreciating the interest shown by the Deputy Commissioner in making the city kerosene free, also urged the people to help in the success of the campaign and make the city the first city to be kerosene free in the state of Karnataka.

A.B. Ibrahim, Deputy Commissioner who also spoke said the administration has received as many as 950 applications for new LPG connections so far. He stated that awareness camps will be held on October 8 and 9 at Kavoor, Lalbagh, Ullal and Suratkal.