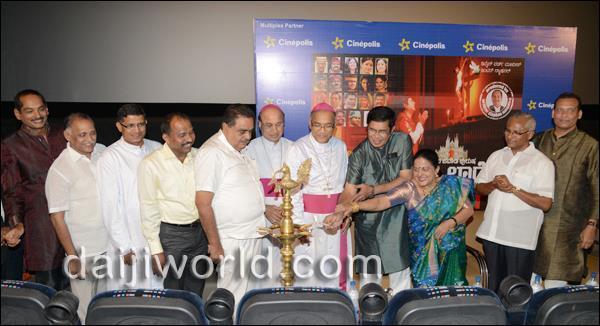 Mangalore, Jan 12: The premiere of ‘Karkalada Pavada Purusha Santha Lawrence’, a Kannada film on the life and miracles of St Lawrence was held here on Saturday January 11. Minister for transport, road, and highways Oscar Fernandes released the premiere show. The occasion also marked the completion of the first anniversary of Divine Word TV.

Congratulating Walter Stephen Mendes, producer of the film, Fernandes said, “St Lawrence is a man of miracles. Our family too has received blessings from the Saint”.

Bishop of Udupi Fr Gerald Isaac Lobo blessed the occasion. He said, “The Saint is known for working for the poor. Let this movie inspire all of us to work for the underprivileged. It is hard to encourage a film with religious themes as they don’t get good profit. Therefore, the efforts deserve appreciation.”

In his presidential address, Bishop of Mangalore diocese Dr Aloysius Paul D’Souza congratulated Mendes and said, “St Lawrence lived for his principles of charity and service. Let this movie motivate the audience follow the values of life.”

Inaugurating the occasion, minister for forest and environment B Ramanath Rai also spoke. Minister for youth and fisheries Abhaychandra Jain felicitated the co-producers.

In his welcome speech, Mendes thanked the co-producers including Ronald Colaco, Frank Fernandes, and Ivan Mendes.

Arun Mendes proposed the vote of thanks. Florence Mendes compered the programme.

It has been directed by Praveen Thokkottu. Story and editing is by Mendes, Thokottu, Fr Mukthi Prakash, and Fr Ronald D’ Souza.

The story of the film is about a Catholic hermit and four of his companions travelling with St Lawrence’s miracle statue from Goa to Karnataka via the sea shore. As they reach Karwar, they try to install the statue in a hut, but they do not find a suitable site. They continue travelling and stop at Karkala’s Parappale ground to take rest. However, when they try to lift the statue to continue their travel, they find that the statue is stuck and cannot be moved. So they install the statue there and then the several miracles that took place after that are shown in the movie.