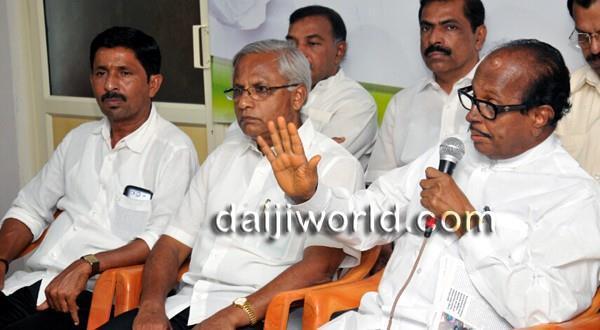 Mangalore, Apr 1: “BJP has filed two complaints against me alleging violation of election code of conduct and I am ready to fight them,” said the Congress candidate Janardhan Poojary, addressing media persons at the district Congress election office here on Tuesday, April 1.

In the first complaint the BJP stated that Poojary had violated the model code of conduct by issuing statements about not allowing the hike in self-assessment property tax at any cost. During the press meet, Poojary in his defence said that not only now, but from a long time he has been saying that he would not allow increase in property tax.

“This was main reason that made people choose Congress during the urban local body elections last year. We will stick to our promise by all means. Earlier, the BJP too had promised the same, but failed to deliver. BJP thus broke its promise and cheated the people,” he said.

“In the second complaint, the BJP has written to the Election Commission that I had urged for reservations to GSB and Brahmins in my speech during the Congress convention held at Town Hall on March 23 and that I had been indulging in caste-based politics. To this, I want to respond that all the castes have reservations, except GSB and Brahmins, which is not fair,” he said.

“There are financially backward people in GSB and Brahmin castes as well, hence the reservations must be given to all the castes. It is not the caste that should be considered for reservation but financial condition. This demand of mine has even reached the top leaders in Delhi and the same has been accepted and included in the national Congress manifesto as well. It is not just during the times of elections, I have been about this issue at other times too,” he explained.

“By making this an issue, are the BJP and the RSS saying that striving for equality for all religions and castes is bad and not acceptable? BJP is liable to answer this question. Doesn’t the BJP make any promise in its manifesto? FIR has already been filed in this regard but I don’t mind going to jail. Position is secondary, I have been fighting for the poor all these years and I am ready for any consequence this time too,” he asserted.

“BJP has looted Gujarat. When the public is asking questions, why is it silent? Why don’t you (BJP) come in front of the media? The BJP has failed in its administration in Gujarat, there is no water in nearly 43% of the rural areas and 25% of cities. There are no toilets, and no adequate drainage facility. BJP must answer to these questions,” he said.

“The BJP has been looting the country and sparking flames of hatred everywhere. Modi has been treated as god. ‘Har Har Mahadev’ has become ‘Har Har Modi’. As per RSS principles, worship of individuals is not accepted, so how can RSS support this cause now and let Modi be worshipped as god?” he added.

“The leaders of your (BJP) own party have been suffering. Jaswant Singh has been shedding tears, Advani has been neglected and Uma Bharti is also facing bad times. Vajpayee was a good leader but Modi will never come to his level. He may be a PM candidate, but his words and speeches are not acceptable,” he said.