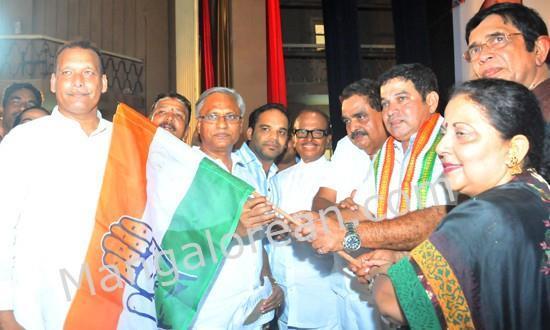 Senior congress leader and working President of District Congress Kodijal Ibrahim welcomed the gathering. The convention was inaugurated by the Union minister Oscar Fernandes along with other party leaders on the dais.

ddressing the gathering Oscar Fernandes said, “Congress was facing problems, when Indira Gandhi was defeated in North India in the 1977 elections, Poojary then had held the baton of Congress and he did not allow Indira Gandhi to lose hope. He helped her to contest the elections from Chikmagalur and return to power”.

“Indira Gandhi was one of the most efficient Prime Ministers of India and is credited with great achievements. She nationalized the banks,

under her leadership Bangladesh was liberated and the 20 point programme for the upliftment of the poor” added Fernandes.

Recalling the winning of the party candidates in 1984 Lok Sabha elections, Oscar said, “We had won in all the 28 constituencies. This time we need to win most of the seats in the state. We have to win the elections. Party workers should work hard in their respective wards for the success of the party. ” Oscar saluted the great leader Janardhan Poojary because when the Party was in trouble, he was the man who encouraged the party leaders and helped in their success.

He also said that if anyone wants to have a fundraiser dinner with a political leader of a party,one should pay Rs 2.5 lakh or Rs 20,000 with a political leader of a another party, but in our party if you want to have food, any person can have it for just a rupee. As soon as Siddaramaiah became the CM, Sonia Gandhi advised him to provide rice at Rs 1, which was mentioned in the election manifesto.

He further said, ” We need to empower women. Indira Gandhi contested in the elections and become the PM, after her death Rajiv Gandhi contested the elections and become the Prime minister, after Rajiv, Sonia Gandhi was offered Prime minister’s post, but she refused the post and asked the party members to make Manmohan Singh as the PM. Sonia Gandhi has given Janardhan Poojary as our candidate. Poojary has served the poor and the downtrodden. There is a need to develop the district. It is the duty of every party members to reach out to the people in the district and bring awareness in the people to vote for our candidate. In Karnataka state, in our twin districts we have four ministers who have been given 8 posts which is a great achievement in the history of the twin districts, he said.

Speaking on the occasion District Minister In-charge, Ramanath Rai said that it is an important election for the congress party. Our candidate Janardhan Poojary has done great service to the society. When he was the minister, he has raised his voice and addressed the problems of the district. When Indira Gandhi nationalized the banks, she had appointed Poojary as the Union Minister of State for Finance in 1982 and he continued to be Union Minister of State for Finance during the Prime Ministership of Rajiv Gandhi until 1987.

Rai also said, Poojary was responsible for the construction of several colleges, schools and temples. Janardhan Poojary is a poor peoples man, because he has worked for the upliftment of the schedule caste/tribes and the weaker section of the society,because he felt that SC/ST are just like rest of the Hindu community “

Rai further said that recently we had a internal election and all the party members were given a opportunity to elect the candidate for the Lok Sabha elections. Election was held in 15 constituencies and DK was one among them. In the primary elections, 90% of the party workers voted for Janardhan Poojary. Poojary is a able candidate and he knows the problems of a poor man. Poojary is able, corruption free, clean and transparent leader. Our duty is to work for the success of the party.

Rai also recalled that when the budget session was going on, BJP leaders were attending a inaugural programme of a cloth store. When a media representative questioned Nalin about the budget, Nalin without attending the budget session said, “it is a useless budget”. It should be noted that, when Modi had come to Mangalore and assured of winning the Assembly elections with a huge margin, the Congress party had won 7 seats out of 8.

He also recalled and said that Bharatiya Jana Sangh (BJS) was a Indian nationalist political party which existed in 1951 which was against the land rights for the poor. In 1980 Jana Sangh was rechristened as Bharatiya Janata Party. The Congress party has worked hard to eliminate humiliation and multifaceted harassment meted to the Dalits and to ensure their fundamental and socio-economic, political, and cultural rights. BJP is talking about Hindus, are SC/ST and Dalit’s not Hindu’s? Then why are they deprived of their rights? Rai questioned.

BJP wants a Congress Free India. The Congress party leaders and workers sacrificed their life for making the country free from the British. While concluding Rai said that all the party workers should work unitedly for the success of the party in the forthcoming Lok sabha elections.