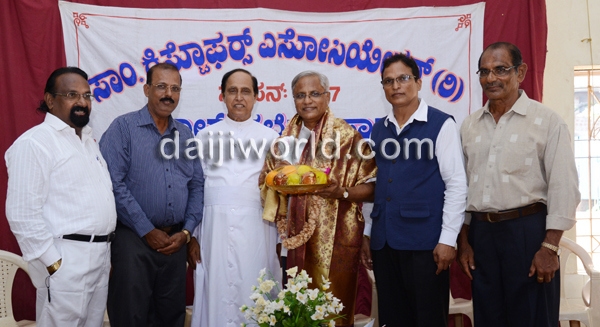 Share
Mangalore, Aug 4 : “We have two Christian representatives amidst us and they have always kept a low profile and work for the poor and needy; they are also quite approachable,” said Msgr Denis Moras Prabhu Vicar General of Mangalore Diocese.
He was speaking at the celebrations of St Christopher Association Feast. J R Lobo, MLA Mangalore South constituency and Ivan D’souza MLC were honored on the occasion.
The ceremony was held on Sunday August 3 at Rosario Cathedral, Mangalore. Msgr Denis Moras Prabhu was speaking after the celebration of the Eucharistic Mass and blessing of the vehicles of the association members. He presided over the ceremony and said, “Earlier, we used to search for big persons as our political representatives, but now that barrier is no longer considered.”
J R Lobo said that he was committed to serving the needy while Ivan D’souza said that he too would join hands with J R Lobo and serve the association.
16 children of the association members were  honored for special achievements and were presented with bouquets and mementos.
Raymond D’cunah, president welcomed the gathering while secretary Herald read the report. Vice president Francis D’souza read out the financial reports and vice secretary Denis D’souza delivered the vote of thanks. Lancy D’cunah compered the programme.
Honorary president Susheel Noronha conducted the election of the new governing body. Denis Lobo was recognized for recruiting highest number of members in the year. Manager Dolphy D’souza helped in the arrangements for the ceremony.
The new office bearers for 2014-15 are Raymond D’cunha Valencia re-elected unanimously as president, vice president Francis D’souza, Rosario secretary Herald D’souza Cassia, treasurer and spiritual director Fr J B Crasta, joint secretaries Leena D’souza and Denis D’souza Vamanjoor and honorary president Susheel Noronha Kulshekar.