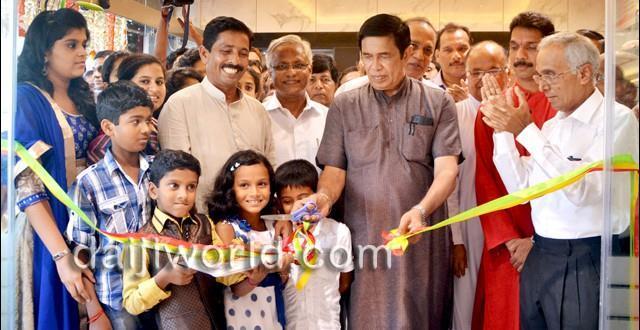 Image from Post Regarding Harsha opens second showroom in city, 11th in state

Mangalore, May 11: Harsha, a leading name in home appliances and consumer electronics retail, opened its 11th showroom, the second in Mangalore, on Sunday May 11.

The showroom, located at Milagres Complex in Falnir Road opposite to the Milagres Church, was inaugurated by Oscar Fernandes, union minister for road rransport, highways and labour and employment in the presence of other dignitaries.

The showroom was officially inaugurated by cutting the ribbon and lighting the auspicious lamp. Oscar Fernandes later garlanded the photo of Bola Poojary, the founder of Harsha.

In his inaugural address, Oscar Fernandes said, “Harsha has brought happiness to my heart and to many others today. I shared a great bond with Bola Poojary, the founder of Harsha. The 11th showroom of Harsha has been inaugurated on the date 11, which is again special and unique.”

He further said, “In my inaugural speech earlier, I had advised the directors of Harsha to not just focus on Mangalore and Bangalore, but also open showrooms in Delhi and other prime places, but today I would like to amend this statement and say that Harsha should have showrooms not only in India, but even in foreign countries. The main reason I am saying is the high standard they have maintained.

“We always ask the foreign companies to set up their business outlets in our country but it is time firms like Harsha go abroad and start business. The main secret behind Harsha’s success is its volume of sales and stocking techniques. Harsha does business with values and thus it has been successful to this extent and is still growing.”

In his address, Vinay Kumar Sorake said the special and salient feature of Harsha is that all the 11 showrooms have been inaugurated by Oscar Fernandes himself. “This showroom belongs to people and the people must use it in the best way possible. Even the staff of Harsha consider the firm as their own and thereby serve better. Let Harsha become the best of all in its business,” he wished.

In his presidential address, Ramanath Rai said Harsha has been a household brand in the state, and the prime reason for this is the loyality and transparency it has followed and maintained in doing business. “Harsha has already started its business in major cities of our state; I wish that it extends to foreign countries and other parts of our country as well,” he said.

Oscar Fernandes handed over the bill to its first customer Ashok Mendonca, who also happens to be the interior designer of the showroom.

Directors of Harsha, Ashok Kumar, Harish M, Suresh and Rajesh were also present on the occasion.

This is Harsha’s second showroom in the district and its 11th overall. The showroom has a modern look, with youthful and larger-than-life personality. Spread across three levels, the new Harsha showroom offers more choice from the world’s best brands, whether it is the latest in home utility items or cutting edge digital technology.

Harsha has the largest collection of refrigerators, washing machines, air conditioners, microwave ovens and more on level three of the showroom, called the ‘freshness zone’.

The largest collection of television panels, smart phones and tabs, laptops, printers, digital accessories, digital cameraa and much more are in level one, called the ‘innovation zone’.

A unit of Prakash Retail Pvt Ltd, headquartered in the temple town of Udupi, Harsha has been serving consumers for the past 27 years. What had started as a single store in Udupi on March 9, 1987, has now transformed into a leading consumer durables’ retail chain in the state with 10 successful stores across Udupi, Mangalore, Puttur, Kundapur, Shimoga, Hubli, Belgaum, Dharwad and Bangalore. The group today has a customer base of over a million and 1.8 lac square feet of retail space across Karnataka.
Courtesy:Daijiworld