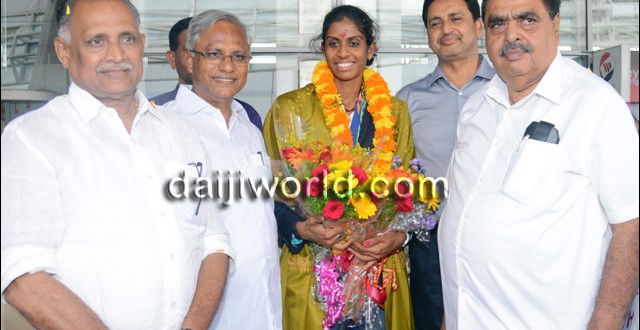 Image from Post Regarding Golden girl Poovamma gets rousing welcome

Mangalore, Oct 7: Poovamma, upon her arrival from Incheon, South Korea after participating in the Asian Games received a grand welcome at the Mangalore International Airport on Tuesday October 7.

She made the Mangaloreans proud after winning bronze in the women’s 400 metre race event and a gold in the women’s 4×400 metres relay by setting a record timing of 3:28:68.

Poovamma speaking on the support given by the state and Indian Athletic Federation said, “So far we did not receive support, but from now onward I hope that we will continue to get support. The Federation and the government of Karnataka is supporting us; the ministers too have joined in the welcome. Our ministers had also arrived in South Korea and wished us well and so we expect the same in future too.”

“Asian games is a great thing. It may be gold, silver or bronze. Though we did not have proper facilities, we performed well in athletics. I am satisfied with a bronze medal, but my aim is to get a gold during the next Asian Games. Difference in performance is seen due to weather changes.

“Indians have always been experts in relay. We feel delighted when our country wins gold medals; it is also a matter of joy when people from Karnataka represent sports and win medals. Especially, I feel proud to say that I am a Mangalorean, because even ministers and the administration have come together for this welcome,” she added.

“Sponsors should come forward to support the athletics. Now perform with the help of our expenses; hence to move forward somebody should come approach and support us. The state government should also support to athletes and train them abroad. The Federation alone cannot do everything. I never attended any international games before the Commonwealth Games and it was here we came across international teams,” she said and added that it was the reason they needed exposure.

State minister Abhayachandra Jain on the occasion assured that he would speak to the Chief Minister about providing international training to the athletes.