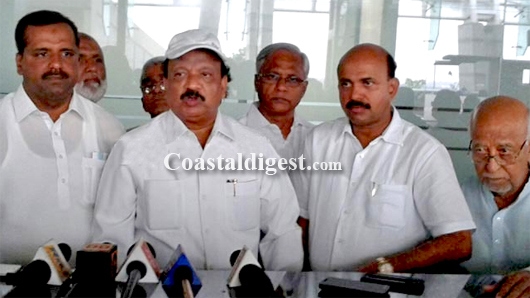 Mangalore, Aug 27: The flight carrying the first batch of Haj pilgrims was flagged off by former education minister B A Mohideen at Mangalore International Airport in Bajpe on Wednesday, in the presence of Minister for Infrastructure Development, Information and Haj R Roshan Baig.

The flight carrying a total of 130 Haj pilgrims, including 64 male and 66 female pilgrims, was flagged off at 10 a.m. on Wednesday. Minister for Health U T Khader and other elected representatives such as J R Lobo and Moideen Bava, DK district Wakf Advisory Committee president S M Rashid Haji were present during the flag-off.

Pilgrims from Dakshina Kannada, Udupi, Chikmagalur and neighbouring districts in Kerala have left for Madinah in Saudi Arabia in the first batch of passengers.

Interacting with mediapersons after flagging off the flight, Mr Baig said that the flight that took off from Mangalore airport was carrying the first batch of pilgrims leaving for Hajjrom the country. A total of 700 pilgrims will fly from Mangalore airport in a total of six flights to Saudi Arabia from August 27 to September 1. This year, a total of 5,000 pilgrims will leave to perform the annual Hajj pilgrimage from Karnataka, he said.

However, he did not comment on the delay in the setting up of a Haj Bhavan in the district.

Mr Khader said that a team of seven doctors, 14 nurses and a pharmacist had left with the first batch of pilgrims from Mangalore to offer necessary health services to the pilgrims if required.