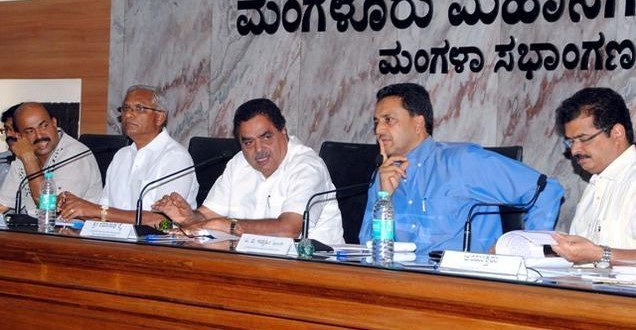 A meeting convened to review the functioning of the Mangalore City Corporation left the task of taking decision on key “policy issues” to the MCC council, which is yet to be put in place. The meeting was convened by B. Ramanath Rai, Minister in-charge of Dakshina Kannada, on Monday.

The four issues were related to collecting solid waste management cess from property taxpayers from 2014-15; increasing property tax from the next financial year; constructing a bus stand and transport hub at Pumpwell Circle; and handing over 2.5 mgd (millions gallons a day) capacity water supply line from Thumbe to Padil to Dakshina Kannada Zilla Panchayat.

The Commissioner of the corporation Ajith Kumar Hegde S. urged the meeting, attended among others by J.R. Lobo, MLA, Mangalore City South and Mohiuddin Bava, MLA, Mangalore City North, and B.A. Ibrahim, administrator of the civic body, to take decisions on what he called “policy issues” as the elected council was not in place.

The councillors, who were elected in March 2013 are yet to assume office following a stay on the election of Mayor and Deputy Mayor for the MCC. Some councillors-elect also attended the meeting.

Mr. Rai said that it was left to the council of the corporation or the administrator to take a decision on them.Mr. Hegde said that the civic body required Rs. 19 crore for acquiring 11.59 acres of private land at Pumpwell for constructing a bus stand-cum- transport hub, in addition to 7.23 acres in its possession. It did not have money to acquire land.

A decision would have to be taken whether to go ahead with the proposal or drop it.

When Mr. Ibrahim said that it was possible to build a bus stand on the available land at Pumpwell, using the modern technology,

Mr. Rai asked him to get a design of the same done and place it before the next meeting.

But discussions on the subject ended abruptly.

Mr. Hegde said that under the Karnataka Municipal Corporations Act, 1976, property tax would have to be revised every three years and solid waste management cess would have to be imposed. As gram panchayats between Thumbe and Padil were drawing water from the old pipeline, (2.5 mgd capacity) of the corporation, it was better to hand it over to the zilla panchayat for maintenance and the old pipeline was not required for the civic body. No decision was arrived at on this too.