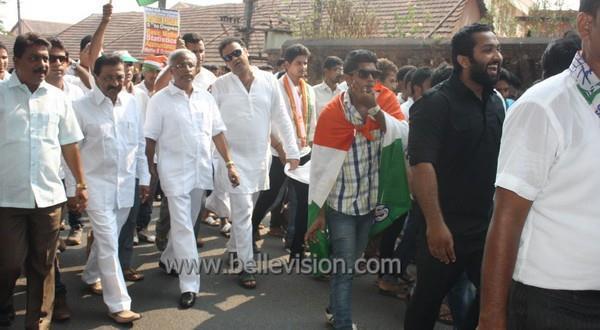 Mangalore, 4 Apr 2014: ‘Karnataka is the significant state in India which has surged in development during Congress reign, especially during the late CM Devraj Urs, a crusader of social justice and empowerment of poor/oppressed. Bangalore and Mangalore are prominent cities that are known worldwide for IT and education sphere respectively. The last reign of BJP derailed the developments by indulging in the corruption, favoritism and self interest. Nowhere in the history of Karnataka, has a Chief Minister gone to prison over corruption charges and he is none other than the former CM B S Yeddyurappa. BJP veterans blame Congress for scams and corruption, while the same leaders are blind over illegal mineral mining in Madhya Pradesh and illegal mineral mining/sand mining in Chattisgarh. BJP has agenda of Hindutva and caste/religion oriented politics that divides the society and destroys the common brotherhood. Congress has core values of peaceful co-existence and equality among the people of different religions, caste and creed. It has stood by its core values all through its reign,’ said AICC vice president Rahul Gandhi.

Addressing a mega convention of party activists and supporters at Nehru maidan, here on Friday April 4 at 5.00pm, Rahul Gandhi said that during ten-year rule of UPA, it has tried for upliftment of poor and rural masses by introducing National Employment Guarantee Scheme that entitles wages for 100 days of labor, by introducing Right to Information (RTI) Act, Right to Education (RTE) Act. It has granted 50 percent reservation to women in Panchayat Raj and its attempt to introduce Women Reservation Bill to grant 33 percent to women in Lok Sabha and Vidhan Sabha has been blocked by opposition parties in the parliament. Meanwhile, if Congress once again comes back to power in the upcoming LS polls, it would be passed, assured Rahul.

Congress aims to empower BPL families to the status of middle class, and also educationally empower their children, besides, to grant housing to homeless. In order to provide gainful employment to youth, an industrial corridor linking national capital with Mumbai, Chennai and Bangalore will be developed, asserted Rahul.

AICC has introduced novel method of short listing candidates for the upcoming LS polls by holding primaries across the nation. The veteran Congress leader and former union finance minister Janardhan Poojary was chosen to be candidate to contest LS polls in Dakshina Kannada constituency, said Rahul.

Rahul concluded his speech with the hope of UPA coming back to power at the centre in the upcoming LS polls.

The activists of DYFI and women organizations staged protest holding black flags at the district headquarter alleging failure of Congress led both union and state government in protecting the women and moved on to the entrance of venue, where the policemen arrested them.

A large number of party activists including well wishers were also present. Prior to the event a Congress rally led by Janardhan Poojary was taken out from the party office to Nehru Maidan. Also the procession led by MLA J R Lobo started from Rosario ground to Nehru Maidan.