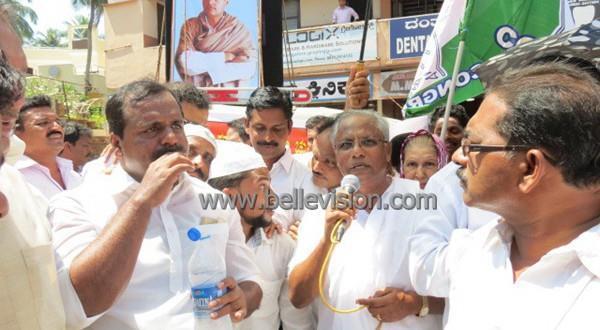 Mangalore, 14 Mar 2014:Dakshina Kannada (DK) District Congress Committee (DCC) launched a walkathon at Tokkottu here on Friday March 14, in order to create mass awareness on the need of building a stronger nation. The walkathon was concluded at Kuloor junction on National Highway (NH) 66.

Taking a dig at BJP, he said, ‘The district BJP is asking for votes not in the name of their candidate Nalin Kumar Kateel but in PM candidate Narendra Modi’s name. That means the BJP in Mangalore is not my opponent, and neither is Nalin Kumar. My opponent is Modi. It is a fight between Modi and me. Let them field Modi from Mangalore,’ said Poojary.

Poojary further said, ‘BJP has done nothing for DK district or for Karnataka. BJP says Modi will bring heaven, and that Gujarat is already a heaven. Everyone knows what has happened in Gujarat. The poor in Gujarat have remained poor. He has not done anything for them. Almost 40 percent of the people are unemployed and desperate to find jobs. As many as 13 lac applications were received for 1,500 jobs. Modi has no answer for this. In Madhya Pradesh (MP) 1 unit of electricity was purchased @ Rs 7, while in Gujarat it was purchased @ Rs 13. In Karnataka it cost only Rs 5 per unit,’ said Poojary.

‘Modi is telling lies and has no answer for all these questions. One-third of the small scale industries in Gujarat have shut down. They reached heaven already. Around 800 farmers in Gujarat have committed suicide. Lands are given to corporate customers at or throwaway prices. Awareness on all these anomalies should be created among the voters by the Congress. The Gujarat riots are not to be forgotten so easily, said Poojary.

Referring to Modi’s marital status, Janardhan Poojary said, ‘Poojary has helped Narendra Modi by revealing his marital status. If Modi does not submit details about his marital status to electioneering commission, he will face problems. Women are equal to god. Women should go to every house and inform people that Modi is married, and that Jashodaben is his wife. They should say what Jashodaben told the media when asked about Modi. Just imagine how much Jashodaben must have cried for him. Modi has no right to contest for the PM’s post,’ said Poojary.

Speaking on the occasion, state health minister U T Khadar said, ‘It’s a happy moment for us that we are launching walkathon to tell people of the development undertaken by our party in the country. It aims to bring success to Janardhan Poojary in the general elections. The Right to Information (RTI) Act was brought about by Sonia Gandhi. We also brought the Right to Education (RTE) Act. We have given good MPs from this district in the past. Let this rally create ripples of change everywhere,’ said minister U T Khader.

MLA J R Lobo said, ‘This rally is very important for us. We want Congress to win in Mangalore and in all other constituencies. We will not drop any person in our march towards development. Congress has worked hard for the development of India,’ said MLA Lobo.

The traffic was disrupted for sometime when the rally was in progress. A few city bus passengers alighted from the bus during ongoing rally and preferred to walk to their nearby destinations.