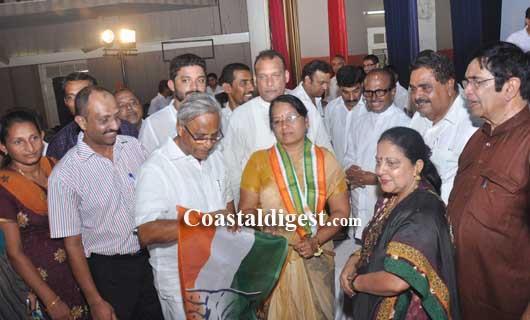 The party workers’ convention was inaugurated by Union Minister for Transport, Road and Highways Oscar Fernandes, in the presence of district in-charge minister B Ramanath Rai and former Union minister Janardhan Poojary.

In his inaugural address, Mr Fernandes said that the party should follow its basic principle of releasing the poor from their financial burdens. To remove the shackles of economic burden, we need education and empowerment of the lower classes including Dalits and women, he said.

Lauding the achievements of Mr Poojary, who is the Congress Lok Sabha candidate from Dakshina Kannada, he said that the country recognised the man due to the fact that he held the Congress flag aloft at a time when the party has lost heavily in northern parts of India. Whether he wins or loses in the coming elections, he should be saluted for his contribution and leadership, he said, adding that the party workers should unitedly work towards the aim of bringing India into the top four positions in the country.

“It is our responsibility to build and strengthen the party at block levels. We have to give a good fight in the elections,” he added, calling upon party members to work towards winning all the seats in the state in the elections.

Addressing the gathering of party members and followers, Ramanath Rai said that the people of the district were aware that the achievements of the previous MP in the district were nil. It is now upto the people to decide whether or to re-elect the BJP candidate for another term. By ensuring the win of Congress, the party should give a definite answer that people of the district will not vote for those who sow the seed of communal hatred between communities, he said.

He said that Poojary had worked for the country and welfare of the district by raising his voice for necessary issues in the Parliament. “Having chosen him as the Lok Sabha candidate for the district, our responsibility has increased. We should work with sincerity to ensure his win,” he said.