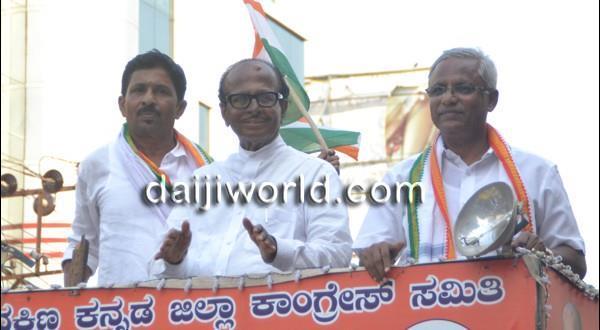 Mangalore, Apr 15: On the last day of the campaigning for the Lok Sabha elections, the polling for which will be held on Thursday April 17, the district Congress organized a rally in the city on Tuesday April 15.

The rally which was flagged off from Nehru Maidan proceeded through State Bank circle, Rao and Rao circle, Vishwabhavan, Kodialbail, PVS circle, Ballalbagh, Lalbagh, Ladyhill and culminated at Urwa market ground amidst a large number of party workers and supporters.

Addressing the rally at Urwa market ground, Congress candidate from the district Janardhan Poojary said, “Power is not permanent. Youths have enthusiastically taken part in this rally which indicates good future for India. Dakshina Kannada is a beautiful district of intellectuals who have contributed a lot to the country in various fields like banking, industries and engineering. Our district has sufficient power. Every community is intellectual in its own way. Wherever we go we can find the intelligent people of our coastal district, across the country as well as abroad. Do we need a Gujarat model for this intellectual district? We have our own power. Gujarat is no heaven, it is a hell.”

He further said, “People of Dakshina Kannada are intelligent and brave. We do not want Gujarat model in Dakshina Kannada. There is reservation for SC/STs and backward classes but not for Brahmins and GSB communities. There are poor people in these communities too. Hence I raised voice in Delhi and Sonia Gandhi promised this reservation in the party’s manifesto.

“For speaking out on the issue of reservations, BJP and RSS have filed a case against me. I am ready to go to jail for the cause of the poor. We acted as we promised. I will not cheat the people,” he said.

Health minister U T Khadar on this occasion said, “Congress workers are not only ready to shed their sweat but also their blood for the victory of Janardhan Poojary. Party workers should work hard till the elections are over. People should send Janardhan Poojary to Delhi and throw BJP and SDPI into the Arabian Sea.”