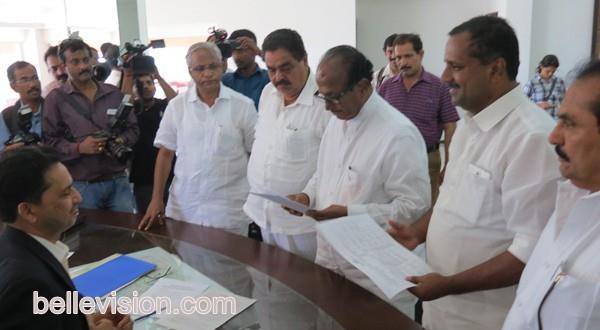 Mangalore, Mar 26, 2014 : Congress veteran leader and Lok Sabha candidate contesting from Dakshina Kannada constituency B Janardhan Poojary filed his nomination papers to contest in the upcoming LC polls with Dakshina Kannada (DK) district Deputy Commissioner and electioneering officer A B Ibrahim here on Wednesday March 26, being the last day to file the nomination.

A large numbers of party activists were gathered outside headquarter of district administration.

Addressing the media persons after filing the nomination papers, Poojary said, ‘I have filed 4 sets of nomination papers as mandated by Election Commission. Our campaign has already begun and the party workers are enthusiastically partaking in it,’ said Poojary.

‘Our padayatra received overwhelming response and the work done by CM Siddaramaiah-led state government have been appreciated by the people. We need to build the nation on the foundation of communal harmony and not play divisive politics,’ emphasized Poojary.

Commenting on BJP, Poojary said, ‘BJP right from Kashmir to Kanyakumari has been soliciting for votes in the name of PM candidate Narendra Modi and not in the party’s name or of its candidates. This means the contest is between Modi and me. Other parties like JDS are not even in the race,’ said Poojary.