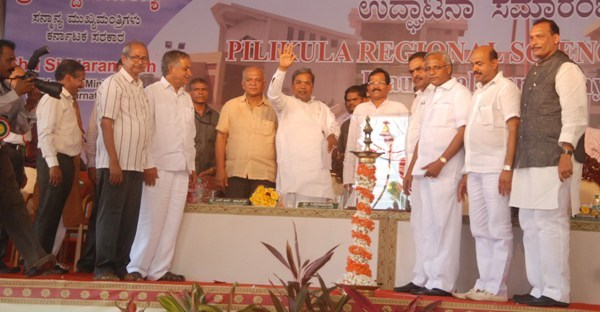 Mangalore, Oct 1: Chief Minister Siddaramaiah and Union Minister Shripad Yesso Naik inaugurated the state’s second PilikulaRegional Science Center that was setup at Pilikula here on Wednesday October 1.
After inaugurating the Science Center, Chief Minister visited various houses of galleries at the centre titled ‘Biodiversity’ and ‘Fun Science’.
Addressing the gathering during the stage programme, CM Siddaramaiah said, “This center is built with a cost shared by both state and union government.”

“This science center is now open up for public visit. For the development of society, Science and Technology is very important. The 21st century is an era of Science. Each individual should cultivate a scientific mentality. Everyone should be aware of Science, only then we can move forward; technological development should be our main aim. Necessarily we should implement science and technology in our programmes, since Science is an essential part for the development of a state and nation,” he added.

“On one hand, Science and technology is developing, but on the other there are also superstitious beliefs.These beliefs arise due to a lack of knowledge and scientific reasoning ability,” said CM.

He continued, “Great saints like Basava rejected the Karma philosophy; many people believe in birth and rebirth. We are not aware of our past or future birth; there is no previous birth nor rebirth. Hence, Basava said that truth is heaven while myth is hell. People with vested interests nurture these kinds of thoughts in society. Hence Article 51 AH in the Constitution was amended because each individual should cultivate scientific mentality. Though the constitution was amended, we are not ready to step forward and thus society does not improve.”

“Science should reach every doorstep. Students should cultivate a scientific mentality and everything should be accepted only after reasoning and questioning the concept. This helps to bring change in society. ‘Mangalayana’ was successfully completed. This is the first attempt and India has emerged as a leader on the world map,” he said.

“The state government will support the development of Science and Technology.The literacy level in Dakshina Kannada is high, but scientific literacy is also important. People in DK should also inculcate scientific literacy and students should become scientists,” he added.

CM also announced that the state government would establish a sub- regional science centre in all districts; he asked for support as well as thanked the union government.

Union minister Shripad Yesso Naik spoke and assured that the union government will be ready to support the state government’s project of setting a Regional Science Centre and came up with a proposal that they would sanction the project. “Our country is a scientific temple. We should create a scientific approach. Science has to be made interesting, so that more number of students learn it. We should encourage non formal means of encouraging science. This Science gallery will encourage the mass to learn more about Science. It will also help in giving information about the recent developments in Science and Technology. An Open Air Science Park will make learning of Science easy for young children. Science is a fun subject and students should make optimum use of this Science center to increase their knowledge.”
He also assured that the pending project of the hanging foot bridge between Sultan Battery and Tannirbavi will soon be structured very soon.
State minister S R Patil spoke on this occasion. Deputy Commissioner A B Ibrahim welcomed.
State District In-charge Minister Ramanath Rai, MP Nalin Kumar Kateel, MLC Ganesh Karnik, MLA J R Lobo, MLA Moideen Bava, MLA Shakunthala Shetty, MLC Ivan D’Souza, Mayor Mahabala Marla and others were present.