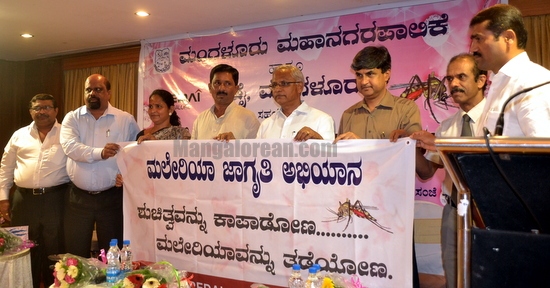 Mangalore: A ‘Malaria Awareness Programme'(MAP) was organized by Confederation of Real Estate Developers’ Association (CREDAI) and Mangalore City Corporation at Hotel Deepa Comforts. A awareness banner on prevention of Malaria was also unfurled during the programme by MLA J R Lobo. The function was inaugurated by lighting the lamp by Minister U T Khader, along with other dignitaries on the dais namely Mayor Mahabala Marla, Deputy Mayor Savitha, CREDAI president Pushparaj Jain, MLA J R Lobo, Dr Srinivas Kakkilaya, Dr B Shantaram Baliga and others.

Speaking to the audience, Minister U T Khader said, ” I strongly advise the builders to see that there is no stagnant water collected at their building, which gives scope for the growth of Mosquitoes. Appoint a extra person to look after the clean-up at the construction sites, to make sure there is no stagnant water collected, which by doing so we control mosquito breeding. There is a increase in the Malaria cases in DK and Udupi districts, out of which 61% of the malaria diseases are found in DK. Sad to note that out of 5329 malaria cases reported in DK, Mangalore itself has 4822 cases”.

He further said, ” People live in posh apartments, but keep their doors and windows closed all the time to keep the mosquitoes away. What good is it to live in closed place? Instead the apartment residents should make sure that their surroundings are free of stagnant water, rotten garbage and other sources which result in mosquito breeding. By doing so you will be free from the attack of mosquitoes, and you can keep your doors/windows open, and have fresh air come in. I am glad that the members of CREDAI have come up with plans/projects to prevent the growth of malaria/Dengue diseases spread by mosquitoes.”

UT Khader also told the audience not to worry of Ebola disease instead worry more about Malaria and Dengue diseases. Whoever sent the message about Ebola on Whatsapp will be strictly dealt with by the Cyber crime department. Instead of passing rumours about Ebola through SMSs or Whatsapp, you can spread messages about awareness of malaria and dengue, which would be quite effective.

Keynote speaker of the day, Dr B Srinivas Kakkillaya said, ” There are three points that I want to put forth to the builders/contractor, which can prevent the onslaught of Malaria – appoint a person at the site to maintain cleanliness around the construction area; Provide mosquito nets to all the workers who spend night at the site ; and Find an alternative to water for curing. Me and MCC have chalked out plans to improve the present situation. City has been divided into six areas and each area will be handled a individual hospital, where any construction worker suffering from water borne disease can take treatment from that hospital free of cost, which will be borne by the government”.

” Also we are in the process of developing a Android app to maintain malaria data i a hassle-free way. Through this the doctors and health officers can access the malaria reports right in their mobile phones” added Kakkillaya. Yet another key-note speaker Dr B Shantaram Baliga also spoke on the prevention of malaria and dengue cases. Mayor Mahabala Marla also speaking on the same topic, said not to blame the MCC all the time for the spread of Malaria, each citizen is also responsible to keep their areas clean which will prevent Malaria, and he also warned of closing laboratories that don’t submit reports of malaria cases to MCC in time.
MLA J R Lobo speaking said, ” I have a remedy for malaria – by eating more papayas you can stay away from getting Malaria. True or false I am not quite sure, but in my case I have been eating lots of papayas, and I never had malaria till now. In Indonesia people boil papaya leaves or add some papaya leaves while cooking other dishes, which has prevented in getting malaria disease. We need to take preventive measures against the spread of malaria. Keep our surroundings free of stagnant water, garbage etc”.
A informative booklet on “Malaria Ecchhara” authored by Dr Subraya Nayak was also released by UT Khader during the occasion. Pushparaj Jain- President of CREDAI had welcomed the gathering, while Vinod Pinto, the secretary proposed the vote of thanks.